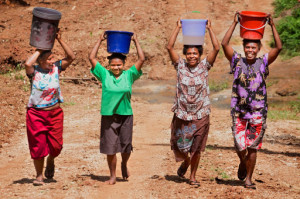 Women are still stuck at the local level, or as limited add-on roles rather than being a part of a radical revision of concepts of peacebuilding and challenging the entrenched perceptions of involvement in existing patriarchal systems. (Image: UNMIT)

Military occupations, terrorist activities, organised crime – these are many of the top stories which we see daily in the media. But how often do we hear about non-violent movements, actions undertaken by charities and non-government organisations or the activities of humanitarian workers… Not enough in my opinion!

How about flipping the coin of conflict over for a while and looking at the people on the ground who are trying to resolve difficult situations through peaceful means? It’s time to shine a light on peacebuilding efforts that happen around the world, and I will take this opportunity to examine the role of women in peacebuilding missions in the Asia-Pacific region.

How do you build peace anyway?

Peacebuilding is an effort to provide support in the immediate aftermath of a conflict, helping with the transition from war with an aim of creating a long-term sustainable peace by addressing the root causes of the conflict. The United Nations has explained it as “measures targeted to reduce the risk of lapsing or relapsing into conflict by strengthening national capacities at all levels for conflict management, and laying the foundations for sustainable peace and development”. They also stress that peacebuilding missions should be examined on a case by case basis, with actions tailored to the needs of the nation in question, and heavily include national ownership.

Let’s take a look at the operation of the United Nations as an overview of how peacebuilding works. Even though every situation is unique, generalisations can be made over matters which can apply to most conflicts:

–   Peacebuilding should provide basic security needs to citizens, this can include: disarmament,       demobilisation and reintegration, protection of civilians, reforming the security sector and strengthening the rule of law

–   Peacebuilding should also provide basic goods and services such as health, education, water, sanitation, and help with the return of refugees and internally displaced people.

–   Peacebuilding can support economic sustainability through employment generation – examples such as through agriculture and public works – but also through restoration of infrastructure.

The United Nations adopted Resolution 1325 in the new millennium which affirms the importance of including a gendered perspective to recognise the impact war has on women and reasserting the important role women play in the prevention and resolution of conflicts. It stresses the vital inclusion of women in peacebuilding efforts and the need for increasing their role in the decision-making process. By looking at Timor-Leste, Papua New Guinea and the Solomon Islands, it becomes apparent that women were pivotal in resolving the conflicts in their nations, but efforts to include them in peacebuilding efforts afterwards were minimal.

The case of Timor-Leste

From the Indonesian invasion of Timor-Leste in 1975, the local people struggled for independence, especially when violent conflict intensified dramatically at the start of the 1990s. Traditionally, the women of Timor-Leste have been accustomed to a separate and lesser role in society, but they involved themselves powerfully during the 24 year occupation. Women were guerrilla fighters and some even commanders of groups and members of the clandestine front. They were critical messengers in the networks which sustained the resistance and brought fighters food, ammunition and provided shelter. The women’s organisations which formed also contributed by equipping women with survival skills and provided occupational training.

These actions gave the women of Timor-Leste leverage in becoming important actors in reconciliation and peacebuilding efforts – but they still had minimal influence in the decision-making processes which occurred in 1999 and 2006. The United Nations Transitional Administration in East Timor (UNTAET) did however stress the importance of gender inclusion in their mandate and made efforts to incorporate women in planning and implementation phases of the peacebuilding process. Timor-Leste has 29.2% of women in parliament, and with an electoral law passed in 2006, requiring that for every four candidates a political party fields, at least one must be a woman – Timor-Leste has become the regional leader for parliamentary representation as well as women holding three ministerial positions: justice, finance and social solidarity.

The case of Papua New Guinea 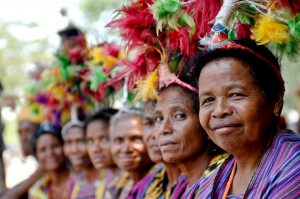 By looking at Timor-Leste, Papua New Guinea and the Solomon Islands, it becomes apparent that women were pivotal in resolving the conflicts in their nations, but efforts to include them in peacebuilding efforts afterwards were minimal. (Source: SPSN News)

A civil war sparked conflict in Papua New Guinea (PNG) in 1988 due to the Bougainville province wanting independence from the mainland. The conflict ended in 1997 with a peace agreement helped by the government of New Zealand. During this time women were prominent for providing essentials in times of strife and facilitating the process of dialogue between the warring factions. Women in Papua New Guinean society have a high status in family relations and had a lot of leverage helping to negotiate peace for their communities. Throughout the conflict, the women of PNG used innovative ways to include their voices, and influence the peace process: they organised prayer meetings, reconciliation ceremonies, peace marches and petitions. Their vital links with women from New Zealand and Australia also helped bring in support and assistance from the international community. Whilst negotiations for a peace agreement were taking place, women were mainly side-lined due to formal negotiations still being dominated by men. However, the women of PNG managed to express their opinions at official meetings and through discreet lobbying of the different parties involved in negotiations, maintaining vital pressure during the process.

There is positive recognition of non-government organisations in Bougainville and a range of these which are led by women grew stronger after the conflict ended. These organisations engaged in a process of restructuring to meet the new conditions for successful peacebuilding efforts to carry on. For example, the Bougainville Integrated Community Development Agency (BOCIDA) previously delivered humanitarian assistance during the conflict, have restructured to focus on literacy initiatives, reproductive health and education. Leitana Nehan Women’s Development Agency (LNWDA) has also slowly transformed its goals to offer services for women and youth in terms of counselling, health awareness workshops and advocacy.

Another general PNG example can be seen in the sub-district of Kup in the highland region where restoration of political processes is a vital aim of one of the non-government organisations, Kup Women for Peace (KWP). Although created by women, the organisation now has an equal make-up of both men and women, KWP has attempted to tackle corrupt election practices which has led to violence and deterioration of basic services in the past. In the lead up to the 2007 general election, KWP put in place various projects such as voting education programmes, getting electoral candidates to sign an agreement in front of the public to commit themselves to a violence-free election, and risked their safety on election day to guard ballot papers. The efforts of the KWP were highly successful as there were no guns present, no fighting during or following the election, no ballot papers were stolen, the signatories of the agreement were not involved in election-related disputes and there was a significant increase in female voter representation.

However, the involvement of women in formal governmental structures and peacebuilding efforts is minimal. Women are underrepresented in all sectors of politics – 6 out of 106 women were represented in the new Bougainville People’s Congress after conflict ceased and the trend has only continued with the Bougainville Interim Provincial Government including only 4 women members. 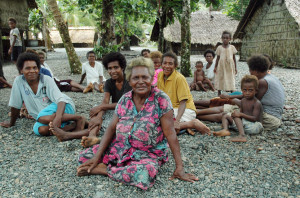 Solomon Islands: Women were important players in determining a successful road to peace on the islands, especially when male political leaders were unable or unwilling to offer support. (AAP Image/Lloyd Jones)

The case of the Solomon Islands

The Solomon Islands erupted into civil war in 1998 between the Guadalcanal and Malaita islanders after long-standing tensions. Women were important players in determining a successful road to peace on the islands, especially when male political leaders were unable or unwilling to offer support. Peacebuilding activities in which the women engaged in included: distribution of food and medicine, clothing and other essentials to displaced families, forming prayer groups, counselling, and visiting women’s groups. Women risked their lives as they undertook actions to mediate between militants, crossing armed checkpoints and travelling in dangerous territory in order to hold meetings to urge the fighters to lay down their guns and talk peace. The women often brought food and clothing with them to build trust and confidence with the warring parties. Without these efforts, the foundations for enabling warring factions to meet and discuss the terms of a peace agreement would have been able to occur.

But, women were not integrated into the negotiation process or in subsequent local or national political levels. Women of the Solomon Islands extended their perceived traditional roles, as mothers, not as active citizens which led to a failure of challenging the present constructions of power. The Regional Assistance Mission to Solomon Islands (RAMSI) installed in 2003 also failed to involve the women of the Solomon Islands in official peacebuilding processes – there was a lack of awareness of cultural issues and a prevalent restricting of women’s concerns to the domestic sphere, which led to a missed opportunity on the part of the mission. The potential of women in the Solomon Islands is not yet fully realised and they are largely ignored in decision-making processes.

Where are the women?

It is obvious that the role of women in peacebuilding efforts is imperative for successful endings to wars, and for post-conflict reconstruction. Generally speaking, women comprise half of any given population, and they are a population which has not been used to their full potential on an international level. Change has been slow. After over a decade since the passing of UN Resolution 1325, only 32 out of the 193 UN member states have created National Action Plans. The fact of the matter is that there is a looming gap between what is said and what is being done – there has been little progress in terms of implementing policies and integrating women on a formal level. Women are still stuck at the local level, or as limited add-on roles rather than being a part of a radical revision of concepts of peacebuilding and challenging the entrenched perceptions of involvement in existing patriarchal systems.

The dilemma is that existing values, norms and practices of gender roles in society has not changed which is why women remain underrepresented. Traditional values do not change or disappear quickly – they need to be actively opposed – we must continue pushing and lobbying among the non-government organisational communities, states and the UN system to break down existing notions of women as primary nurturers, as being powerless, as being victims. We must take the examples of the brave women in the Asia-Pacific and use the extraordinary power and potential they have demonstrated on a formal political level. These examples here are not the only ones: women have waged successful peacebuilding campaigns all over the world – in Liberia, Rwanda, Sierra Leone, Northern Uganda and Northern Ireland just to name a few!

We have made a huge step in the right direction – the language of gender has entered formal resolutions and deliberations – but words alone cannot guarantee a seat at the table, the words must be united with reality. 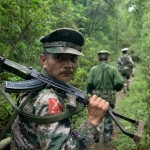