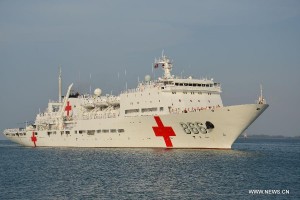 The Peace Ark’s journey is part of China’s ongoing effort to strengthen its relationship with key allies in South and Southeast Asia.

These past two months the Chinese Navy’s Type 920 Hospital Ship, a vast 14,000 ton floating hospital called “The Peace Ark,” docked in major cities of South Asia providing key medical services and surgeries to local residents. Over the course of the next few weeks the ship will sail to Bangladesh, Myanmar, Indonesia and Cambodia before heading back to China in October.

During the five day visit to Pakistan, the ship’s staff clocked in 10 hour days totaling 2,029 outpatient visits and 28 surgeries.

Despite the occasional language barriers, local patients were satisfied with the treatment.  “Though I don’t understand their language, they are so humble,” said an attendant, Ashraf Khan. “Half your pain goes away when the doctors treat you politely.”

The Peace Ark’s journey is part of China’s ongoing effort to strengthen its relationship with key allies in South and Southeast Asia. As tensions between China and Japan have escalated over territorial disputes in the South China Seas, China hopes to stabilize its influence with India and Pakistan. This comprehensive healthcare initiative is only a small altruistic part of a much larger push toward consolidating power across the Indian Ocean.

Only in February Pakistan handed their strategic Gwadar Port, at the apex of the Arabian Sea, over to China for large-scale operational purposes with the China Overseas Port Holding Company. Not only would the port connect China with the Arabian Sea and the Strait of Hormuz (the passageway for a third of the world’s oil), but if the Chinese were ever to use Gwadar as a naval base, the operations could have major implications for Pakistan’s occasional “frenemy” neighbor, India, and the United States. China has also been investing heavily in Pakistan’s nuclear energy projects, the cause of some concern to the United States.

But when The Peace Ark arrived in Mumbai on August 8, India welcomed the vessel with open arms and it was business as usual. “The colors of the sea and our uniform bring us together,” gushed Indian Rear Admiral M.D. Suresh. “The friendship of China and India will not only serve the fundamental interests of the two nations, but also benefits the peace and stability of the world,” echoed Shen Hao, commander and president of the marine hospital. The Peace Ark’s projects and the benefits it provides patients seems to be a diplomatic sigh of relief from China’s other pursuits across the Indian Ocean these past four years, like selling arms to Bangladesh to counter India’s arms deals to Bangladesh’s neighbor and rival, Myanmar. 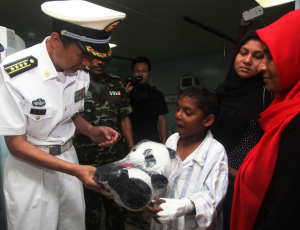 A young patient receives a gift before being discharged from the hospital, July 4, 2013. [Photo by Huang Yuping /Asianewsphoto]

This past June Bangladesh’s Foreign Secretary Md Shahidul Haque headed an inter-ministerial five-day trip to China. The Foreign Minister of Seychelles also made a visit. India, not to be outdone by China’s naval prowess, launched its first ever home-built aircraft carrier the INS Vikant on August 11. Part of a $5 billion project, the 40,000 ton vessel will carry Russian-built MiG-29 fighter jets and other light aircrafts.

“It is going to be deployed in the Indian Ocean region where the world’s commercial and economic interests coalesce. India’s capability is very much with China in mind,” said Rahul Bedi, an Indian defense expert.

As the Peace Ark is part of China’s ongoing effort to stabilize trust in South and Southeast Asia, it draws some attention away from China’s past aggressions and gaffes in the South China Sea disputes. It also balances China’s position across Asia as a counter to the U.S.’s wrist-slapping of Chinese militarization, like their selling of arms to Taiwan, holding naval exercises with Chinese rival South Korea in the Yellow Sea, and allowing the Dalai Lama to visit the United States, and so on.

Trust across South Asia will be hard won for a country so openly expansionist as China, but a pervasive, collective suspicion of Western countries can occasionally make curious allies of former rivals. But fortunately for now, many beleaguered patients all the way from Karachi to Phnom Penh will get some much needed relief from China’s recent efforts at healthcare diplomacy. 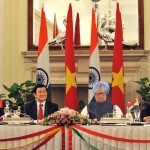 This past July, India reached out a notably munificent hand to Vietnam’s defense forces with a credit line of $100 million for military equipment. It was only a matter of time before …

Related articles in the category Asia and Australasia