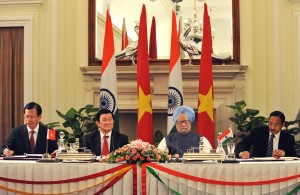 The President of Vietnam, Trương Tấn Sang, with The Prime Minister of India, Manmohan Singh, during the former’s state visit to India in 2011.

This past July, India reached out a notably munificent hand to Vietnam’s defense forces with a credit line of $100 million for military equipment.

It was only a matter of time before a partnership between these two countries developed. China’s expansionist drive across Asia, bracingly close to India’s shores along the Indian Ocean at the Port of Gwadar on the Strait of Hormuz and in the mountainous Uttarakhand-Tibet border, has inspired India to secure stronger alliances with their Southeast Asian allies. The credit line is expected to be finalized by the time the General Secretary of the Communist Party of Vietnam, Nguyễn Phú Trọng, visits New Delhi by the end of the year.

Beyond that, Vietnam’s Phu Khanh basin, which curls along the South China Sea, is rich with oil. It’s already a lucrative reserve for Exxon Mobil and BP and now, for India, whose booming consumerism is driving up demand. This year alone sales in  SUVs in India rose 52 percent so that Ford Motors is accelerating their production capacities across the country.

Vietnam and India’s special relationship reaches back to Prime Minister Indira Gandhi’s first term in office in the 1970s when she openly condemned the 1972 bombing of Hanoi by the U.S. After the end of the Vietnam War, India sought an alliance with the newly independent Communist country, in a push for a more consolidated socialist pan-Asian network to balance the influence of the Western powers. Even in October 2007, a terracotta bust of an outwardly regal, albeit grim-visaged Gandhi, was put up in one of Hanoi’s public parks as a goodwill gesture between the two countries.

These past fifteen years Vietnam has enjoyed a strong defense partnership with India in the civil-defense sector and with training slots reserved for officers in Vietnam’s army. Vietnam also has its eye on buying some of India’s sleek BrahMos supersonic cruise missiles (a collaboration between India and Russia—“Brah” after the Brahmaputra, “Mos” after Russia’s Moskva).

Proved and probable reserves of oil in the South China Sea

On a softer note, defense partnership aside, since 2000 India has aligned an ambitious cultural relationship with its other ASEAN partners in the Mekong-Ganga Cooperation. The collaboration is a long-term networking effort between India, Vietnam, Thailand, Myanmar and Cambodia to strengthen its capacities in various sectors, namely tourism, education, culture, communications, and public health, facilitating an exchange of representatives and ideas. Fundamentally, it serves as a reassuring reminder to the ASEAN countries that they have India on board as a potential ally if and when China becomes too hawkish.

But even beyond all this, if one looks further, India’s ties to Vietnam go as far back as the first millennium CE during the Champa dynasty in Vietnam. Maritime trade allowed for the flow and exchange of Hinduism and Buddhism from India to Southeast Asia, and some of the glorious ruined stone temples, like Po Nagar in Nha Trang in coastal, southern Vietnam, are a reminder of a shared legacy and of a time long before Western colonial powers altered their cultural and political landscape.

The India-Vietnam defense credit line is a shrewdly pragmatic gesture of friendship for two countries who have often felt beleaguered by their occasionally marginal positions at the negotiating table of more influential powers—China, the U.S., Russia, and so on. The ongoing partnership offers us an opportunity to see how India and Vietnam continue to strengthen their military and cultural capabilities through a sustained dialogue. Besides, pockets can only go so deep. 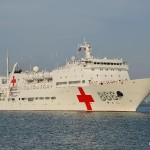 Related articles in the categories Asia and Australasia and BRICS.