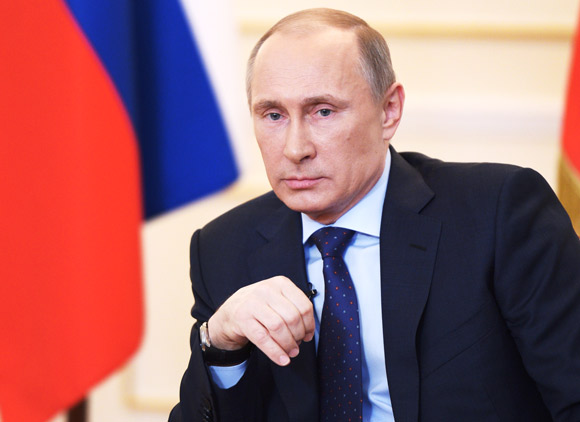 Much has been made of the numerous lies that Putin comfortably relayed to reporters on Tuesday afternoon regarding Russia’s invasion of Crimea.

“Two and two makes five,” wrote Fyodor Dostoevsky in his Notes from the Underground.

Increasingly disillusioned in the 1860’s with western philosophy’s narratives of truth and progress, for Dostoevsky these words encapsulated the essence of social existence. Namely, truth was nothing more than an aesthetic, a perverse commodity to be manipulated by those in power. In Dostoevsky novel, the narrator, Underground Man, speaks not truth to power but power to truth. The novel ends with the revelation that the narrator has been lying to us all along, the final confirmation that truth is but an appearance, a disguise in which power takes refuge. Truth for Dostoevsky therefore becomes the realm of the absurd, the realm in which even the suggestion that two and two makes five becomes an attractive proposition.

It was therefore fitting that Dostoevsky featured in both the opening and closing ceremonies of the Sochi Olympics last month. For Dostoevsky’s aim to flaunt the absurdity of truth in the name of power is one shared deep within the annals of power at the Kremlin.

Much has been made of the numerous lies that Putin comfortably relayed to reporters on Tuesday afternoon regarding Russia’s invasion of Crimea. The State Department’s has released a buzz feed-like press statement documenting all the ‘untruths’ Putin uttered. Arseniy Yatsenyuk, the Ukrainian Prime Minister, intimated to the E.U. on Wednesday that the Russian government “is a government of liars.” And Angela Merkel, the German Chancellor, anxiously remarked to Barack Obama earlier this week that Putin seemed to “have lost touch with reality.”

But that is exactly the point. Putin is willfully operating in the absurd. He is taking pleasure in his Dostoevsky moment.

Putin knows his comments have nothing to do with reality. He knows that no one in the West is going to believe them. That is what makes his assertions so powerful. For Putin is engaging in the ultimate statement of political power: not only is he master of events on the ground, but he is also the master of truth. He can subvert it, twist it, transport it to the realm of the make believe. In Putin’s world, he can make two plus two equal five.

That is why the invasion of Crimea is much more than a military operation. It is a speech-act, a conveyance of Russia’s willingness to not only disregard international norms but to breach them in the most subversive manner possible: by appropriating the West’s own language of human rights and ‘humanitarianism’ to justify violating these very principles.

As paradoxical as it might seem therefore the invasion of Crimea is not about Crimea; it is the latest incarnation of a Russian tradition of constructing scenarios of power. A scenario of power is a term penned by the academic Richard Wortman to describe the tendency in Russian history of political leaders to express their political philosophies through symbolism, via the modes of art, architecture and warfare.

As Wortman’s work suggests, in Russian history there has always existed a form of ‘double truth’, a discrepancy between the ‘truth’ that the Tsarist regimes purported to the peoples concerning the advent of modernization and justice and the deeper reality, the deeper ‘truth’ of enslavement and backwardness on the ground.

To bridge this gap between narrative and reality, Russian leaders have relied on symbols to reinforce their governing philosophies as well as reassert their power. Thus for Peter the Great, the new city of St. Petersburg, with its perfectly gridded layout (in the form of today’s Manhattan) embodied his project of modernizing Russia, of imposing order on the forces of anarchy. And for Catherine II, Minerva, the Goddess of art, wisdom and war, became the leitmotif of her ambition to civilize Russia.

When we consider recent events through the paradigm of the scenario of power, we see that Sochi and Crimea are variations on the same theme: Russian assertiveness.

The Sochi Olympics were an exercise in symbolic politics. The opening ceremony in particular served as an expression of Putin’s governing philosophy: full of Petrine leitmotifs, we saw that in Putin’s narrative of Russian history, modernization is the recurrent theme. There were numerous references to Peter’s navy, the symbol of the Czar’s Russian Empire; particularly intriguing was Putin’s decision to project an image of the gridded, mathematically ordered streets of St. Petersburg on the Olympic arena’s floor.

Peter’s well-ordered city was the spatial expression of his political philosophy of the well-ordered state, the historical precursor to Putin’s ‘managed democracy.’ Putin was making clear that he was the successor to Peter’s authoritarian, in which the rights of the individual were sacrificed to the higher ideal of the serving the abstract concept of the gosudarstvo, the state.

Putin’s opening ceremony provoked anxiety among those aware of the Petrine legacy. For as Peter modernized, he also began to expand it both to the West and to the East. In the context of Crimea, the Sochi opening ceremony thus takes on a much more sinister form.

But there is also one striking difference between Czarist Russia’s form of scenarios of power and Putin’s. While Czarist rulers used their scenarios to suggest their monopoly of a singular truth, Putin has used his scenarios to convey his power in an alternate manner. He conveys his power by mocking truth, by subverting it and playing with it. His scenarios, while demonstrating his desire to create the Greater Russia of Czarist times, also convey a postmodern message. Putin knows truth is power in the modern age- it is widely known that the works of Lyotard, Derrida and Lacan are often cited in his circles. What better way then to express your power than to show that you are the master of truth, able to render it malleable?

Putin’s postmodern authoritarianism is thus the most curious form of governance of our times. Everyone knows that it is based on corruption, oligarchs and the illusion of freedom. This impossibility of freedom is after all the mantra of the ideological fountainhead of Putinism and until recently the deputy head of the Presidential administration, Vladislav Surkov. Surkov has even written a novel drawn from the postmodern tradition entitled Almost Zero, a novel that depicts how elites by necessity manipulate the truth to ensure public order.

Crimea is thus the postmodern orphan of the Cold War. Face to Face are two international powers who no longer assert totalizing projects of modernity in the form of muscular democracy on the one hand, and Communism on the other. In their place is a 21st conflict.

On the one side is an America that if admiringly assured of the merit of western values, is nevertheless mindful that the exercise of its power relies on a great deal of hypocrisy, as seen in the NSA scandal, Iraq and its record on human rights. It has retreated from notions of a singular truth; Barack Obama even suggesting in an interview with David Remnick that he has no ideology, that he is above all a pragmatist.

On the other side is a Russia that no longer pretends that truth exists. Instead it mocks the very notion. It deploys a postmodern authoritarianism which aims to disarm the west by mimicking it, adopting the latter’s own language of international law to violate that same principle. It is therefore anachronistic to speak of a new Cold War. For the Cold War was a conflict of ideologies that claimed to represent the pinnacle of human existence, the singular truth of social relations. Neither Russia nor the U.S. claims that now.

Thanks to Dostoevsky, what we are witnessing is a new form of diplomatic war: the postmodern one.