This article was originally published in The Huffington Post 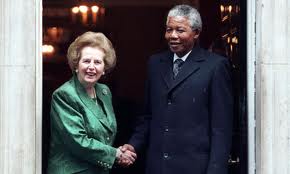 Margaret Thatcher stirred up sentiments among many in the UK, but her foreign policy characterised by the Falklands War, the fall of the Iron Curtain and the way she dealt with the South African Apartheid regime were no less controversial, the latter of which – as David Cameron admitted – resulted in Thatcher standing on the wrong side of history.

Nearly two decades after the end of Apartheid, Thatcher remains a controversial figure in South Africa.  Whilst Jacob Zuma sent his condolences, former Cabinet Minister Pallo Jordan accused her of supporting the Apartheid regime by preventing sanctions. He does not consider Thatcher’s death as a great loss.

Thatcher has emphasized repeatedly that the she is a strong opponent of Apartheid. However, her idea of the struggle against Apartheid diverged starkly from the approach applied by other opponents of the white minority regime in South Africa. Her viewpoint was strongly opposed on the domestic and the international level alike. The British anti-Apartheid movement condemned her stance and the UK was the only member of the Commonwealth voting against sanctions, much to the embarrassment of the British.

Whilst the international community considered sanctions as the best option to bring about change in South Africa, Thatcher emphasized the need for “constructive engagement” rather than measures that would not only destroy jobs, but, as a consequence thereof, would negatively affect  many blacks in South Africa. In addition, Thatcher feared the influence of communists in South Africa if the Apartheid regime were to fall. Although her stance is often argued as having undermined the struggle against Apartheid, it is also believed to have guaranteed her influence in and leverage over the Apartheid regime.

However, in 1986 the US Congress – after overriding Reagan’s veto – imposed sanction based on the Comprehensive Anti-Apartheid Act. Similar actions were taken by Europe and Japan and Thatcher, having no choice, increased her pressure on South Africa accordingly.

The argument that South Africa presented a bulwark against communism was rendered worthless at the end of the Cold War and her “carrots” – in the shape of opposing sanctions – were accompanied by a “stick”. Whilst the UK remained South Africa’s biggest trading partner, Thatcher emphasized her opposition to Apartheid and demanded the release of Nelson Mandela and several other ANC members to enable multi party talks. The release was also set as a pre-condition for her visit to South Africa.

How much Thatcher’s influence contributed to Mandela’s release is not clear, but considering her leverage she might have had more influence than many other organisations or head of governments at that time.

“Thatcher did more to release Nelson Mandela out of prison than any of the other hundreds of anti-Apartheid committees, in Europe”

However Thatcher’s approach is evaluated two decades after the end of Apartheid, she remains a controversial figure not only in the UK, but also abroad. Her actions in the context of the global politics of the 1980s and the ambivalent feelings towards her among the ANC members are probably best summarized by the official ANC statement on her passing:

“She was one of the strong leaders in Britain and Europe, to an extent that some of her policies dominate discourse in the public service structures of the world. Her passing signals the end of a generation of leaders that ruled during a very difficult period characterized by the dynamics of the Cold War.”