For India, 2013 was a year in the limelight of the global media. Cases of brutal rape were widely reported in India and across the world. ‘The insecurity of women, including their vulnerability to rape and abuse’, is now a national issue that has gained global attention. According to the National Crime Records Bureau (NCRB), in 2011 over 24,000 cases of rape were reported in India.  Yet, over 90 percent of reported incidents end in acquittals.

India’s governing elite have so far failed to deliver in securing women’s rights. However, in May of this year, Indians will cast their vote in the world’s largest democratic elections. India’s women represent 49 percent of the electorate and are thus in a position in which their rights can no longer be ignored by politicians. The leading candidates in the forthcoming general elections, Rahul Ghandi, Narenda Modi and Arvind Kejriwal, will have to step up their efforts to win over female voters. Nonetheless, question marks remain on the ability of either candidate to solve India’s rape problem. Rahul Ghandi’s Congress has so far failed in its attempts in government; Narenda Modi’s hands are already stained by the numerous rapes that occurred in the 2002 Gujarat riots and Arvind Kejriwal’s AAP faces the problem of its core support coming from India’s rape capital Delhi.

The inability to control society

There has never been a period of time where a single agency has ruled over all of the Indian sub-continent, from Alexander the Great; the British Raj; or even India’s democracy today headed by a government that fails to control pockets of Indian society. This lack of control became once more evident a few days ago when a woman in the state of West Bengal was ganged raped by 13 men in front of the village community. The rape itself followed an order by a tribal council according to which the women had violated traditional and conservative norms.  Many of these cases are ‘swept under the rug’.  According to India’s first female Assistant Solicitor General, Indira Jaising,  “no amount of Fast Track Courts and Special Courts will deliver justice to women, if those who hold the high office of a Judge of the High Court hold and express such male chauvinistic views.” . Her comment highlights the numerous stories of soldiers and policemen escaping legal or professional repercussions for the rapes they carry out. This was apparent when India’s top ranked officer, Ranjit Sinha claimed that rape should be enjoyed, if it cannot be prevented.

So why has the Indian government been unable to stem the tide of rape, despite the fact it is argued to act in a democratic manner?

The answer can be traced back to the time of the British Raj. Under the British, political representation was not constructed on class, but on ethnic religious groups, such as Hindus and Muslims. Consequently, the divide and rule governance of the British led to a federal India which was built on the foundations of India’s traditional caste system, and its religious and ethnic division. According to India’s constitution the national government is responsible for national interests, such as ‘defence, foreign affairs, currency controls’ whilst the states would be in control of matters including, ‘public order, and policing, welfare, education and local government’. As a result, Arend Liphart argues that India is a consociational democracy. Liphart’s argument is based on the fact that India’s democracy often results in ‘grand coalition governments’, derived from political parties that represent major racial, linguistic and religious groups. Furthermore, within each state, power is divided by pillars of representations within separate communities and villages that contradict the power of the national government. This leads to a potent combination of dictated social conservatism, inadequate education for women, fatwas, and village councils. 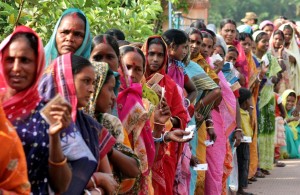 India’s women represent 49 percent of the electorate and are thus in a position in which their rights can no longer be ignored by politicians.

Social conservatism and its illegal enforcement have led to a preference for males over females in Indian society. This is particularly evident in the growing gender gap. Sex determination technology such as prenatal scanning and easier access to abortion has resulted in gender screening. The result over the long run has cost India 60 million ‘missing’ women, and has left India with a surplus of 37 million men. As a result, the ratio between males and females stands at 109:100 in urban and 120: 100 in rural areas. The gender inequality is of great concern as it has exacerbated rape and hindered India’s economy. If a developing country’s female-to male ratio drops to less than 0.75%, it leads to a detrimental impact to female equality. Over a long period of time, the proportion of the female workforce then declines in size and this can reduce a country’s GNP by 20%.

Acts of sexual violence have already hampered India’s lucrative tourism industry, which accounted for 6.6% of Indian GDP in 2012.  A market with huge growth potential, India seriously needs to bolster tourism in order to construct new jobs. Thus, predictions for the Indian economy to grow by a lower rate of 5.7% in 2014 highlight the need for India’s decision makers to take revolutionary measures that will re-entice foreign investors. A bearish sentimentality added to the rising cost of key commodities resulted in India’s rupee to fall to record lows of Rs 62.53 to 1 Dollar towards the end of 2013. The impact to India’s economy has subsequently created a widening gap between rich and poor, socio-economic situations resulting in men increasingly using women as a sexual outlet, and to reinforce an out-dated system of patriarchy.

What can India’s next prime minister implement to stem the tide in rape?

First and foremost, tackling the inequalities faced by Indian women will need to be addressed from the grass root level, rather by top down bureaucratic approaches. Thus, Ghandi, Modi and Kerjiwal should tap into the grassroots women movements – including rallies and women’s rights groups, such as the National Commission for Women. Secondly, the perception of women needs to be changed from an early age. More needs to be done to educate India’s growing and frustrated youth. Rather than viewing women as an outlet to vent social and economic frustrations, women should be respected and empowered. Most importantly, attitude to conceptions of masculinity and femininity need to be readjusted. Thirdly, the elections could be used as a platform to reaffirm the value and dignity of women. Bollywood and Indian television need to reinforce women as leaders rather than portraying them as housewives and sexual pleasures. Yet, these solutions will only bear fruit in the long run. In the short term, the government could enable better access to technology. For example, voice technology on mobile phones provides women with an outlet in rural areas to report crimes of rape. This would surely stem the percentage of cases that have been swept under the rug.

Regardless of the outcome of this year’s elections, empowerment for Indian women will not happen overnight. If Indians can overcome the rigid norms that have so far shackled the power of women, then India as a whole has a chance to overcome the numerous problems that has plagued it since independence. The future for India and its women can be a bright one if more is done to change the patriarchal and self-interested attitudes that have so far halted any measurable progress in India.