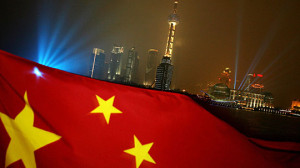 Reports released on 10th July 2013 have indicated that China’s economy is not growing as initially predicted. Both the International Monetary Fund and the World Bank have decreased their outlook in regards to China’s economy.  This new outlook has been based on new figures released by China’s General Administration of Customs. These figures provide a grim outlook for China’s ability to meet its target growth figure of 8% by the end of the year.  Zeng Yusheng, a spokesman for the administration, argues that China is suffering from a bout of “prolonged sluggish foreign demand”, due to a lack of demand from the United States and Europe since the repercussions of the 2008 global financial crisis.  Thus, declining demand resulted in a 3.1% fall in Chinese exports to $174.3 billion. In addition, China’s economy has as of yet been unable to ignite its consumer demand, resulting in a 0.7% fall in imports, amounting to $147.1 billion.  As a result, China’s trade surplus for the year so far has declined by 14% to $21.7 billion.  From these figures, one can assume that China’s economy has begun to falter. Yet, it could also be said that President Xi Jinping and China’s ruling elite have began shackling China’s economy to prevent it from overheating. And so, China’s leaders are once again reshaping its country’s developmental trajectory, moving the economy away from export orientated growth and towards a balanced economy with greater domestic consumption. This can be reinforced by the recent actions from the People’s Bank of China, who refrained from injecting the economy with extra liquidity. In addition, the CPC has recently introduced tougher regulations on ‘risky and undisciplined banking’. 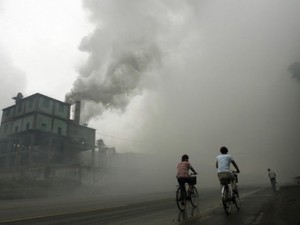 Pollution as a consequence of rapid industrialisation

It is a little early to tell whether President Xi Jinping and his lieutenants are able to transform China’s economy. However, one can examine the past to discover how China’s recent success can be attributed to reforms initiated by Deng Xiaoping in the late 1970s. Deng who died in 1997 can be described as the chief architect of the numerous reforms which steered China away from the ‘horrors’ of the cultural revolution. Yet there is no ultimate road to where the economy is going. Deng wanted to create an economic system with lasting institutions to develop China, rather than to import a Western economic system. Deng, however, retained control through China’s stalwart Communist one party system, using continued economic growth to achieve political legitimacy. This is advantageous as political stability allows the ruling elite flexibility in co-ordinating and managing economic growth. It was also Deng’s Midas touch that reinvigorated China’s economy in 1992 when he came out of retirement to resolve the political infighting that was threatening to derail China’s trajectory to economic success. This time however, if developments do not go according to plan, the CPC does not have the remarkable Deng to turn to.

Today the outcomes of Deng’s reforms have transformed China. Firstly, Deng introduced successful agricultural policies that have allowed the CPC to build a platform of economic growth, underpinned by burgeoning agricultural and industrial sectors. In addition Professor Li Xiaouyn, from China’s Agricultural University, argues that China’s success in lifting millions from poverty could be attributed to its successful agricultural policies. Secondly, since market liberalisation, China has become the largest receipt of FDI for the past ten years.  According to the World Bank, China attracted over $100 billion in 2008.  This is one reason for China’s accession to the World Trade Organisation in 2001, and an explanation for China’s increasing service industry. This factor is arguably pivotal for China to transform into a consumer orientated economy in the future.

Between 1978 and 2008 China’s market reforms paid dividends, with its sustaining annual GDP growth of 8.1%, underpinned on an average annual industrial growth of 11.5%. With all of China’s success, rapid industrialisation and economic growth has created new problems which the CPC now needs to tackle. With state industrialisation now fully exhausted, China’s heavy reliance on its export orientated growth leaves current premier Xi Jinping with the problem of a middle income trap and the diminishing returns of productivity. As a result, the CPC’s legitimacy is now dependent on its ability to deliver economic growth, to continue modernising central China, and to maintain lifting its citizens from poverty.  However, not only does Xi Jinping have to contend with the problems of transforming China’s economy, there are also looming challenges of epic proportion that threatens to derail China’s future growth. These include its ageing population and its blighted environment. 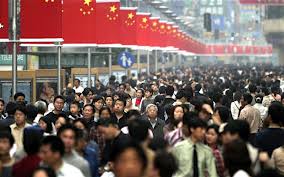 The drawbacks of China’s developmental model

According to the World Bank, China’s population currently stands at around 1.351 billion. Due to its remarkable economic successes, the OECD predicted in March that the Chinese economy will surpass the U.S economy in terms of GDP by 2016.  KPMG states that China’s huge population gave it a platform for rapid economic growth. Yet, KPMG also argues that China’s burgeoning population has caused environmental pressures, making China’s current trajectory to development unsustainable. This is because rising populations induce additional pressures on environmental resources, which include ‘energy, and food and water resources’. Homer Dixon adds that human induced pressures cause environmental scarcity. For example, the coastal regions on the South China Sea feed over 300 million people, and are the main source of protein to the region.  In 2000, however, ‘over 11 million tons of fish were consumed’ in the region, despite the fact that fish stocks in the North East have fallen drastically since the 1990s.

Will China grow old before it gets rich?

David Smith articulated a canny phrase to describe China’s demographic problem. Smith posed the question, ‘Will China grow old before it gets rich’. Smith is referring to China’s ticking time bomb. He argues that China is currently in ‘demographic sweet spot’ where its high population has been over utilised to facilitate economic growth. Since the introduction of the one child policy in 1979, added to the low fertility of women, China’s long term population perspectives seems to be unstable. Currently, out of the total population in China, 16.6% are 14 or younger, whilst 13% are over 65. As a result, Pricewaterhouse Cooper projected a bleak demographic outlook on China, claiming that by 2050, the working age population would reduce by 18%, which would in turn dovetail Chinese growth. Mokdadi Rahab Lekganyeane-Maleska reinforces this argument by claiming that population growth impedes economic development. This is because a huge population results in states allocating greater resources on social welfare rather than for development. Thus China’s future young will face a 1-2-4 problem, where one adult will be supporting two parents and four grandparents. By 2030, there will be over 167 million Chinese aged over 65, which will induce pressures on China’s pension system, which in the end could lead to the collapse of the economy.

If China’s population continues to grow by 0.6%, China will hit the ‘Lewis Point’ by 2020. Though China’s population is contracting, it is currently offsetting this trend with rural to urban migrations. Yet by 2020, China will face a shortage of 140 million workers. A fall in the supply of labour would affect China’s level of productivity, key for achieving rapid and sustained economic growth.  For China to overcome these approaching structural problems, the Lewis point in particular, President Xi Jinping will need to advance China’s technological innovation for the foreseeable future, to ensure continued economic growth.

For the time being, it can be said that President Xi Jinping and the CPC face numerous challenges to enable China to continue its remarkable trajectory of successful economic growth. Predicting the future is difficult at best. However, present and past indicators show that the world may witness a stronger, more vibrant China sitting at the top of the economic food chain if the CPC is able to solve the numerous problems in the coming years.