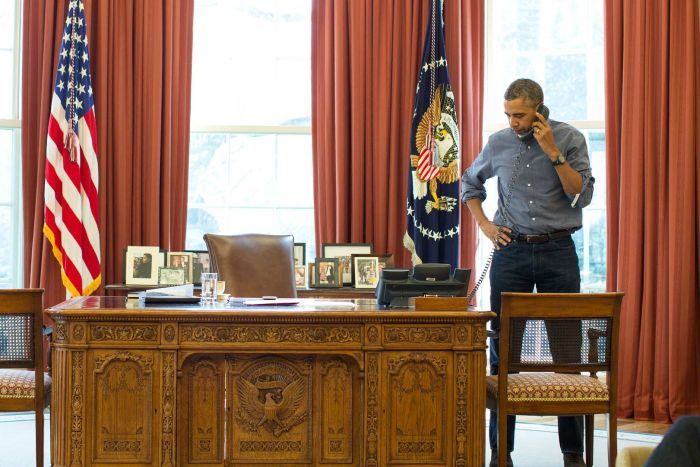 President Obama on the phone with Russian President Putin

The admission was a curious one. Not only because Kennan is the most celebrated American public policy intellectual of the 20th century – having laid out the basis of the Cold War’s winning strategy of containment – but also because Obama’s foreign policy embodies the logic of Kennan’s caution realism: a willingness to decouple security from democracy, to sacrifice principle on the alter of pragmatism.

Obama, like Kennan, is a curious mixture of idealism and pragmatism. Like Kennan, he toys with meta-narratives of international affairs, such as democracy promotion and the value of human rights, but is distrustful of them. He is reluctant to relapse into what he refers to as the ‘emotional absolutism’ of the post-9/11 age, of allowing notions of justice to dictate the United States’ foreign policy. Instead, Obama has targeted a mindful foreign policy, an era in which foreign policy decisions are not necessarily determined by the logic of appropriateness, of the need to defend foreign peoples in foreign lands, but rather the logic of consequences, by which path of action requires the least commitments while still satisfying core interests.

Of course, this begs the question of what the United States’ core interests are?

As it happens, just like Kennan, Obama seems to have defined these in narrow terms. He has, as U.S. Secretary of State John Kerry noted recently, led America into a ‘new isolationism’, one in which America is no longer an empire but a republic no longer willing to police the world.

The defining feature of this ‘new isolationism’ has been the decoupling of security from democracy in U.S. foreign policy. In an era in which the Copenhagen School of international relations theory has emphasized the advent of the process of ‘securitization’, whereby traditionally non-security issues, such as climate change, are existentialised, prioritized, by being placed within a security framework, the most striking feature of the Obama presidency has been the reverse process: de-securitization. Obama’s Presidency has been marked, rightly or wrongly, by a willingness to water down what is considered as the national interest.

As Syria has shown, Obama is not adverse to turning a blind eye to tyranny when the geopolitical calculus does not favour U.S. intervention. This de-securitization of U.S. foreign policy was apparent in a speech Obama made to the U.N. General Assembly concerning the Arab Spring in September 2013. Obama did not include the installation of democratic regimes as one of the U.S. core’s interests in the region. He listed it fifth in the U.S.’s lists of priorities, behind confronting external aggression against allies, securing energy supplies, fighting terrorism and halting nuclear proliferation.

This begs the question of how a President who has led a campaign of U.S. retreat can be compared to George F. Kennan, a political strategist associated with American resilience, one whose emotional disgust at the Soviet Union led him to describe it in bestialized, misogynistic terms in his ‘Long Telegram’.

The answer is simple: point defense. 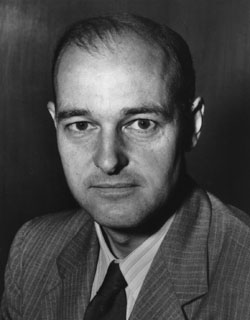 George Frost Kennan (February 16, 1904 – March 17, 2005) was an American adviser, diplomat, political scientist, and historian, best known as “the father of containment” and as a key figure in the emergence of the Cold War. (Image: Wikimedia)

For much too long Kennan has wrongly been associated with the Cold War foreign policy of Harry Truman, and in particular the manner in which Truman deployed containment first in his eponymous doctrine and then in Korea. Truman couched containment in Manichean terms, as a battle between good and evil, “between those free peoples of the world…and oppressive totalitarian regimes.” Kennan, while in private agreeing with the sentiment of Truman’s rhetoric, was wary of presenting the conflict with the USSR to the public in such terms. Kennan was wary that by ‘narrativizing’ the Cold War in public, by making the American people consider each conflict in terms of good and evil, U.S. executives risked constructing foreign policy crises over every issue. If each contest became a symbolic battle between light and darkness, even a small skirmish in the least geopolitically of interest nations would require a full U.S. involvement.

In short, the U.S. would have to commit itself to a policy of line defence, whereby it was imagined that a line was drawn between the American and Soviet spheres of influence. If the Soviet Union threatened any part of the American hemisphere, Washington would act. Kennan feared that such a policy was irrational, that it would risk unnecessary escalation of the U.S.-Soviet relations and undermine containment, which sought defeating the USSR by beating it at a long peace in which U.S. political and economic superiority would prevail.

Kennan instead advocated point defense. According to this plan, the U.S. would only defend strategically key areas. It would ignore Soviet provocations elsewhere, knowing that containment could not be won, but only lost in those regions. America would not defend the whole democratic line. Instead it would establish a number of key defensive points, a number of red lines that could not be crossed. The avoidance of a catastrophic setback was the central aim. Nothing more than that. A strategy that became clear when Kennan opposed Truman’s decision to go North of the 38th parallel; for Keenan defense, not offence was the name of the game.

It is this cautious realism that echoes in Obama’s foreign policy today. A desire to manage, to contain events but not to be defined by them. Obama, like Kennan, has principles. But he sets a very high threshold when it comes to operationalizing them. He too draws red lines which while expressing what is unacceptable to the President, also convey to his opponent what is acceptable. He is willing to be pragmatic, to concede geopolitical ground which he considers not worth the fight. And when necessary even to redraw his red lines when his threshold for action is threatened, as the case of Syria demonstrated last fall.

Which is why reports of a new Cold War breaking out over the Ukraine crisis are baffling. While primary responsibility for the Cold War’s outbreak in 1947 lay with the paranoia and intransigence of Stalin, it nevertheless took Truman’s rhetorical escalation of uneasy relations between the Soviet Union and the U.S. as well as his partition of Germany to institutionalize the Cold War. If Truman had reacted in an alternate manner, it is possible that an uncomfortable but less dramatic mode of co-existence between the two superpowers would have emerged. After all, as Frank Costigliola and others have demonstrated, Roosevelt was not indifferent to the prospect of making concessions to Moscow, disguising in his universalist call for the Atlantic Charter to be realized the more cynical principle of four world policemen who would each maintain their sphere of influence impeded.

Obama today is much closer to Roosevelt and Kennan than Truman. He is unlikely to conceive this conflict in existential terms as either part of a narrative between good and evil or democracy versus autocracy. He’ll accept the loss of Crimea reluctantly. He might impose stringent economic sanctions if Russia takes parts of eastern Ukraine. But he will not risk reproaching Russia too much. He will muddle through. Placing little faith in ideology, principle or emotion when it comes to foreign policy he will see no reason to intervene resolutely. He will contain Russia. He will not push it back.

For in Obama’s world, there is no dog in this fight. Only a crisis to be contained. A further discomfort, after Iraq and Afghanistan, to be endured.