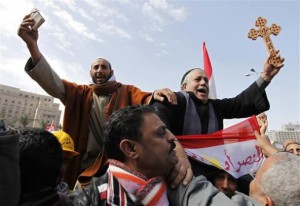 A Muslim holding the Koran and a Coptic Christian holding a cross in Cairo’s Tahrir Square during the period of interfaith unity on February 6, 2011 (Image: Dylan Martinez)

For several years, the world has borne witness as the Middle East has undergone the greatest change since the end of European colonialism. Regimes have been toppled, civilians have risen against military elites and new ideologies have flourished. These events have completely transformed the lives of many people in the Middle East, but, as a group, it is the Christians of the region who have experienced some of the greatest upheavals. Christians are now struggling with isolation from the state and a crisis of identity within this new era of Middle Eastern politics.

The Coptic Christians of Egypt are the biggest Christian community within the Middle East; numbering approximately 10 million people. Other significant Christian populations include Assyrians in Iraq, Maronites in Lebanon, Armenian Christians in Turkey and Lebanon, and Syriac Orthodox Christians in Syria and Jordan. These are a varied, ancient and influential people within the Middle East, but with the onset of the Arab Spring and the Islamisation of regional politics, they have struggled to understand their role in the current political environment.

Egypt and Syria are two nations in which the effects of the Arab Spring have been most profound, and within each country, the Christian population is under pressure to determine what their future relationship with the nation state will be.

In Syria the Christian population (estimated to be around 15% of the total at the last census in 1960) has sought to isolate itself from the current civil war. For Christians the violence currently engulfing the nation has become an inter-Islamic conflict, with Sunni Muslims forming the opposition to the Alawite and Shi’a elements within Syria. However, the Christian population has not been able to achieve the distance from conflict that they wanted. They, like other minorities within the nation, such as the Kurds, have been subject to attacks by the Sunni population, and many have been fleeing Syria for neighbouring Turkey. Observers have argued that the violence in Syria has become a sectarian conflict and for some extreme Sunni’s, Christians are one of many minorities on the wrong side of the divide. Radical Sunni’s see the Christians as a threat to the Islamic state they want to install within Syria, and therefore targeting this population is acceptable to them.

The problems facing Syria’s Christian population are not unique within the Middle East. In Iraq, the civil conflict there drove many Christians away from the nation; they were amongst those who suffered the greatest following the allied invasion of 2003. Again, extremists within the Sunni population saw the Christians as a threat to their Islamic state, and as a result life for Christians in Iraq became increasingly intolerable. However, both of these cases were in the context of war and violence. Elsewhere the divisions have long been a part of national society.

In Egypt the problems facing Christians were not the result of conflict. The Coptic Christians have been a significant minority group in Egypt for over a thousand years, and throughout most of their history, they have been on the margins of Egyptian society; despite their large and centralised population. Since the Egyptian Revolution, their role within the governance of the nation has dwindled further, and violence against the community has increased. 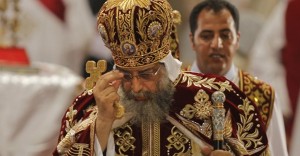 Since the onset of the Arab Spring, Coptic Christianity in Egypt has been undergoing a reassessment of its role within Egyptian society. During the initial protests against the government, the “Copts joined with Muslims in Tahrir Square to overthrow Hosni Mubarak” calling for the end of the authoritarian regime that had been in control of the nation. However, with little initial direction or leadership, the Egyptian Uprisings quickly became centred on the Muslim Brotherhood. They assumed the mantle of leadership, opposed the Mubarak regime, and resisted attempts by the army to assert their control over the nation. The importance of the Brotherhood in the aftermath of Mubarak’s downfall set the foundations for the establishment of the Morsi regime. Thus, the first democratically elected leader of Egypt was a former Muslim Brotherhood member, and his rise to the Presidency symbolised the start of an Islamic, religiously rooted government.

The result of his election was to largely alienate the Coptic Christian population. Moves were made to introduce Islamic-based laws into Egyptian society; a move that would have destroyed the secular nature of the modern Egyptian state, and as a result, would have further isolated the Copts. There have always been elements of the Coptic community that have struggled to integrate with their Arab, Muslim neighbours; their enclaves around Coptic Cairo and in Abbasia, where the Coptic Cathedral stands, are testaments to this detachment. Being Coptic therefore often refers not only to being part of a religious community, but also to an ethnic identity. Consequently, If your Coptic identity is defined by both religion and ethnicity, then it becomes difficult to reconcile your beliefs and way of life with the majority Arab and Muslim population existing around you.

During the early stages of the Arab Spring, Copts, if only for a brief moment, were not Christians or even Copts but rather Egyptians. They had stood side-by-side their Muslim neighbours. However, this unity quickly degenerated, reverting to the deep divisions that had blighted the Egyptian state previously. Since Morsi was elected and the hold of the Muslim Brotherhood on Egypt tightened, the Copts’ life in Egypt has grown increasingly inhospitable. Many have died in clashes with Sunni Egyptians; Copts have been isolated from political office, and their property attacked and looted.

With Morsi’s overthrow, Egypt has been plunged into chaos and the divisions have widened further. The Copts, led by Pope Theodoros II, participated in the removal of President Morsi and since then they have been victims of Sunni reprisals. Morsi supporters have made the Copts the targets of their anger, and the consequence of this has been violent attacks on members of the community. In the past month a ten year old girl was shot dead by a Sunni Muslim after her bible study class. This appalling attack sent shockwaves through the community but it was just part of a wider campaign by the most extreme elements of Egypt’s Sunni population to target the Coptic people.

The attacks and political isolation have left the Christians in Egypt struggling to understand their role in the nation. Their ethnic and religious origins have long separated them from much of the Egyptian opulation, but with political Islam growing in power and influence they are suffering. Islamists are quick to question the Coptic populations’ commitment to the development and governance of Egypt. With Egypt’s Islamic population intensifying its focus on the role of the Copts, the Copts’ own questions regarding their identity have become increasingly important.

The future for Christian communities in the Middle East is unclear. The rising power of political Islam has had huge ramifications for the region’s Christian population. In Iraq and Syria, conflict has torn apart Christian communities and forced many to flee both countries. In Egypt, the Christian population has remained at the heart of Egyptian life, but like other Christian communities, it faces repression, sectarian violence, political isolation, and social exclusion from these majority Arabic, Islamic states. However, despite questions remaining over what role they can play in the Middle East of the future, they continue to exist as some of the oldest and most influential minorities in the region. They have helped to shape the culture, language, religion, society and history of nations, (such as Egypt and Syria) since the time of Jesus Christ. Despite the rise of Islamic politics, these communities, born in the cradle of Christianity, are likely to remain as a core element of Middle Eastern society.