The geopolitical struggles have often polarised the region putting the Saudi lead Arabic countries on one side and Iran and its supporters on the other.

The Middle East is a region of great rivalries and divisions. Many struggles have been played out in the battlefields of the region, whilst others take place in the media, around the tables in government offices and in the minds of the people. Across the Gulf lie two of the Middle East’s most fierce rivals; Saudi Arabia and Iran, two nations that have become locked in a modern ‘Cold War’.

Like the Cold War that dominated the 20th century this struggle between Iran and Saudi Arabia is rooted in a clash of ideology and religious doctrine. At the centre of divisions the struggle for influence and power within the umma, the international Islamic community of followers. Whichever nation can exert the greatest influence over the umma has the ability to promote their own brand of Islam and political ideology on the region. With Islam dominating the culture of the region the leader of the umma can effectively portray themselves as a figurehead for the wider Middle East.

Saudi Arabia’s politics and religious traditions were founded on the principles of Sunni Islam and it has risen above all other Islamic nations to dominate Islamic scholarship and the development of political Islam. By contrast Iran (one of the few global theocratic governments) is a proponent of Shi’a Islam. This branch of Islam has always been diametrically opposed to the Sunni traditions and its followers have often been on the margins of the umma. This exclusion has created a natural, in-built tension between the two religious branches; a tension that has defined the political relationship between Iran and Saudi Arabia.

What exists now in the Middle East is a multi-polar society. On the one side is Saudi Arabia, an oil rich monarchy that has always been at the centre of Islam and Arabic culture. It has links to the West and within the Middle East has allies, not just in the Gulf monarchies, but across the region from Egypt to Jordan. On the other side is Iran. The regime has largely been alienated within the world, but it has powerful allies. Iraq became an pro-Iranian nation during the post-war reconstruction, whilst  Assad’s regime in Syria and Hezbollah in Lebanon have long been allies of the Ayatollah. The problem is that neither side can accept the dominance of the other, Iran fears a Sunni Orthodoxy would cause great suffering for Shi’as, whilst Iran’s “claims to represent Islam are not so readily entertained by other Sunni Muslim states”[1], who see Shia Islam as an often heretical religion.

However, like the Cold War of the 20th century, this struggle is about more than just ideology. The geopolitical divisions have now become key issues that divide Iran and the Gulf States. Iran sees itself as a natural hegemonic power in the region owing to its large population, military might and geopolitical position which has made it the connecting nation between the Caucasus, Indian Sub-continent and the Gulf. However, Saudi Arabia has a different view. It has seen its influence in the Arabian Peninsula grow rapidly due to its powerful monarchy and oil rich economy. In addition its power over the Near East and Northern Africa has also increased as the influence of Egypt and Syria (previously considered Arab nationalist leaders) declined. This geopolitical struggle has manifested itself in proxy conflicts across the region. Palestine, Iraq and most recently Syria have become battlegrounds in which national interests are not just at stake, but also the influence and dominance of the two Middle Eastern rivals. The post-war reconstruction of Iraq is one of the best examples of Iran and Saudia Arabia’s rivalry. Iran has taken the upper-hand in regional political control ensuring that the new government is pro-Iranian; It saw involvement in the rebuilding of Iraq’s government as a way to create a political buffer between itself and the Arab States and thus supported the ascension of politicians, such as Iraq’s President Jalal Talabani and critically Prime Minister Nouri al-Maliki. Both leaders oppose the Ba’athist, Sunni Arab government developed by Saddam Hussein. President Talabani is a Kurdish politician, who has sought to fight Arab prejudices against the Kurds and Prime Minister Maliki is a Shi’a Muslim, whose religious views have made him a natural ally of Iran. However, despite Maliki’s religious views, his Arab heritage has ensured a continued Iraqi voice in the Arab League, though one which will often support the political aims of Iran, such as encouraging dialogue with Syria during the recent civil war[2]. The rebuilding of Iraq was an important political competition for Iran and the Arab states and with Iran firmly establishing its political and economic dominance within the country (“Iran is Iraq’s biggest trading partner, with Iranian products accounting for a huge chunk of Iraq’s imports”[3]) it has only furthered regional competition, as the GCC seek to curb Iran’s ascendancy. 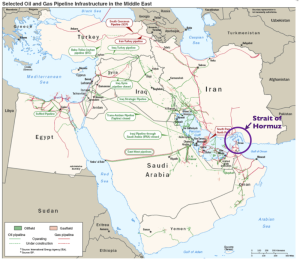 The geopolitical struggles have often polarised the region putting the Saudi lead Arabic countries on one side and Iran and its supporters on the other. They are fighting for allies in the Middle East, always seeking to generate positive outcomes for their respective governments. Often the prize is economic dominance and with both Saudi Arabia and Iran being major oil and gas powers whoever comes out on top would dominate one of the most important global commodities. The result of this economic rivalry can be felt throughout the region. In the Gulf, control of shipping lanes has become one of the most heavily contested commercial issues. Through the Straits of Hormuz most of the world’s oil and gas is transported and it is along this narrow stretch of coastline that Iran has sought to bring the greatest economic pressure against the Gulf monarchies. The Iranian navy has been ever present in these waters and they have the ability to theoretically shut off access to the Gulf, therefore halting the trade of oil and gas out of much of the Middle East. This move would threaten global energy security and bring the economies of the Gulf monarchies crashing down as fears over supply grow.

But for all the ideological struggles, battles for economic superiority and fights over political supremacy the region has not yet descended into open conflict between the two giants of Middle Eastern politics. Like the Cold War of the 20th century the two powers are afraid of pushing the button and triggering a regional conflict. Instead they are operating by proxy throughout the region. Conflicts, such as the Syrian Civil War and the War on Iraq were theatres in which the rivalry of Saudi Arabia and Iran were played out and the Gulf is the battleground in which economic issues are being fought over.

However, like the Cold War before it, the biggest struggle is within the minds of the Iranian and Arab people. Both nations have an intractable view of the other; views enflamed by national pride and descend from the very origins of the Islamic conquests when Arab expansion reached the borders of Persia and religious divides threatened to break apart the state. Today the media and internet have become increasingly important in determining what relationship Iran and Saudi Arabia have with each other. Although decisions will ultimately be made in the offices of Tehran and Riyadh, it is within the public that these decisions gain validation and it will be within the public that conflict between the two will be undertaken or prevented. Many have written on the relationship between Saudi Arabia and Iran; a relationship which has become the focal point of Middle East discourse. The two powers teeter on the edge but with both governments fearful of the repercussions of any conflict the rivalry will remain a ‘Cold War’ centred on economic struggles and proxy wars heavy with ideology and opinion.