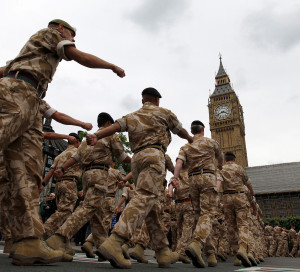 Britain enters 2014 in the midst of a strategic crisis. Reducing the size of the armed forces and simultaneously neglecting a militarily-impoverished Europe is plainly unsustainable. (Image:Channel 4)

Just before the country settled down for Christmas, two alarming reports made national headlines. The first suggested that the British Army is at risk of becoming a high-tech but ultimately ‘hollowed-out’ force, and was swiftly followed by news that Prime Minister David Cameron is ‘prepared to block any attempt to give the EU a bigger role in coordinating defence policy.’ Both betray an inherent weakness in British defence strategy. As the long-awaited post-Afghanistan space becomes a reality, it begs the question of whether Britain has any sensible security objectives at all.

At the end of a year which saw Westminster ramp up the withdrawal of troops from Afghanistan and come perilously close to military intervention in Syria, British foreign and defence policy is at a loss. If Cameron is looking to run on a Eurosceptic ticket for the 2015 general election, he is going about it the right way, but few will thank him for it. Through his Home Secretary, Theresa May, he has been banging the anti-immigration drum, fuelled by the right-wing press and its apocalyptic fears of Romanian thugs and Bulgarian fraudsters. Resentment is emanating from far across the Channel and Britain stands to lose out both politically and economically.

If Cameron chooses to block overtures toward greater military integration in Europe, he is consigning himself to an isolated future of high-risk unilateral intervention. Such a policy is disastrous for two key reasons. Firstly, it categorically fails to fill the vacuum left by Washington’s growing indifference toward European security, ultimately leaving the continent unprepared. The US is right to begrudge the disjointed and unbalanced military relationship that has developed between it and the EU; for years it carried the military burden in Afghanistan and then Libya, and was poised to do so in Syria. Secondly, it excuses other European states from contributing to joint operations, resource-pooling and capability-sharing. As Judy Dempsey laments, ‘Europe’s security and defense policy is in bad shape. This is despite huge security challenges in its Eastern and Southern neighborhoods and beyond.’

The underlying problem is disconcertingly simple. However opposed to collective intervention and security Britain may have become since Iraq, it pales in comparison to European attitudes. In 2011, the Netherlands took the decision to disband its two remaining tank battalions in the name of austerity. Germany under re-elected Chancellor Angela Merkel enjoys unrivalled economic prowess and yet refuses to accept a proportionate military responsibility. It has become the ‘unwilling hegemon’. Francois Hollande’s France withdrew prematurely from NATO’s Afghanistan operations in late 2012 only to become quickly consumed by unilateral intervention in two former colonies. Against this backdrop, Britain has fashioned itself as an ad-hoc coalition partner – open to a humanitarian contribution where feasible, but disinterested in a European ‘project’.

Although Whitehall continues to meet minimum NATO requirements of investing 2% of GDP in defence, Cameron has to his discredit dented relations with Brussels. Aside from refusing to sign an EU fiscal integration treaty two years ago, The Economist reminds us that ‘in 2011 Britain vetoed plans for an EU operational headquarters, annoying not only France but also [the increasingly important] Poland’. Furthermore, ‘France contributed more forces than Britain to the Steadfast Jazz exercise’, which aimed to place a united dampener on Russian antagonism back in November. Cameron justified this stance on the basis that the country gets a raw deal from Brussels, but really the Conservative Party cannot accept that Britain no longer enjoys the solidarity of a reliable Anglo-American partnership. 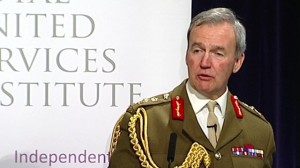 Chief of the Defence Staff, General Sir Nicholas Houghton: ‘…exquisite equipment, but insufficient resources to man that equipment or train on it.’

On the 20th December, the European Council published its recommendations for developing ‘Common Security and Defence Policy’ (CSDP), which paint a bleak picture: ‘Europe’s strategic and geopolitical environment is evolving rapidly, Defence budgets…are constrained, limiting the ability to develop, deploy and sustain military capabilities…The EU and its Member States must exercise greater responsibilities in response to those challenges if they want to contribute to maintaining peace and security’. The call for reform was explicit; ‘Member States [must] deepen defence cooperation by improving the capacity to conduct [joint] missions and operations’. The rising cost of security will dictate that coalitions are the only effective means by which to operate.

Pushing away Europe is a huge mistake for Britain, hammering another nail into the coffin of collective security. The real danger is being wedged in a militarily limbo between European apathy and growing BRICS confidence. The issue is made all the more pressing by reports of a ‘hollowed-out’ armed forces. Disinterest in a common defence policy is one thing, but frugally sapping the ranks is another entirely. Not only does such a policy diminish the number of potential boots on the ground, but can quickly escalate into a ‘brain drain’; the loss of valuable service skills and knowledge. There is no ‘quick fix’ or cheap replacement.

Army 2020, the government’s pithy label for a cost-cutting restructure of the military, is set to conclude with man-power reductions across the board. The BBC reminds us that ‘the Army will lose 20,000 soldiers, the Navy 6,000 personnel and the RAF 5,000’, and greater reliance will be placed on the reserves. Chief of the Defence Staff, General Sir Nicholas Houghton, speaking at the Royal United Services Institute (RUSI), presented his grim outlook; ‘Unattended, our current course leads to a strategically incoherent force structure: exquisite equipment, but insufficient resources to man that equipment or train on it.’ The irony of government overcompensation is not lost considering how it was plagued by body armour shortages a decade ago. From one extreme to another.

Britain enters 2014 in the midst of a strategic crisis. Reducing the size of the armed forces and simultaneously neglecting a militarily-impoverished Europe is plainly unsustainable. It remains unclear what meaningful contribution Cameron could make to a future Libya-style operation without overstretch. What is more certain is that both the Queen Elizabeth-Class aircraft carriers and their accompaniment of fighters are years away from entering service, and that Washington is no fool. There will be the expectation that Cameron pulls his weight, especially after bowing out to public opinion over Syria. With the 2015 Strategic Defence Review firmly on the horizon, the government must address issues raised over military investment or risk humiliation. The solution seems simple enough: swallow your pride and embrace an extensive programme of European military integration. If, of course, you are still welcome.