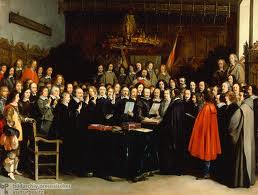 Ratification of the Peace of Westphalia, 1648

Immanuel Kant wrote in the late 18th century that his was an age of enlightenment. If he were alive today it is likely that he would have to adjust his epithet slightly. For according to political theorists and international media alike we now live in a new age: the age of cosmopolitanism. Cosmopolitanism is the new buzzword in international relations. It describes a world that is increasingly post-national. In the now well-known narrative, the advent of globalization has blurred international boundaries, while institutions from the International Criminal Court to the World Trade Organization are slowly, but surely, encroaching on the sovereignty of the nation-state. Added to this is a gradual transformation of the discursive basis of global politics. Our international system is evolving from statism to humanitarianism: as reflected in the doctrine of the Responsibility to Protect (R2P) the individual, rather than the state, is now seen by many as the key actor in international affairs. Or to put it another way, we now live in an age in which two institutional systems are in overlap: supplementing a law of states, we now have a law of peoples. All of this considered, you would be forgiven for believing that we are living in an era of progress. It even might be tempting to agree with the constructivist theorist Alexander Wendt that we are advancing towards the establishment of a world state, or to don the cape of Francis Fukuyama and argue that we have reached a new stage of human development: the Cosmopolitan world. Put simply, it seems as if history is no longer on pause. We’re in fast forward mode again, and cosmopolitanism is the international community’s new paradigm.

This narrative of progress is enticing. But, like all narratives, it also obscures a much more complex reality. For in many ways history is actually in rewind, and while the institutional infrastructure being built around us might seem new and exciting, there is a profound sense of déjà vu. Which brings us to the work of the famous LSE academic Hedley Bull. In his 1977 The Anarchical Society, an instant classic in international relations theory, Bull argued that the world might be going backwards, not forwards. He expressed this paradox in his theory of neo-medievalism: in Bull’s eyes, the advent of globalization had constructed a multi-layered international system that was remarkably familiar. In the ‘pluralisation’ of the international order, with the individual, state and international organizations all becoming prominent on the global stage, Bull saw the remnants of the Medieval world. For before the 1648 Treaty of Westphalia made the nation-state the sole and dominant category in international politics, power in the medieval era had flowed below, through and above the nation-state. In the medieval age, cities took on the function of states. The examples of Florence, Pisa and Venice in Medieval Italy all attest to this. And above the state level, multinational polities and trading blocs such as the Holy Roman Empire and the Hanseatic League vied for international influence with the state. Today’s multi-layered international system thus had a medieval precedent. And, in a number of ways, referring to today’s world as a neo-medieval one is more accurate than labelling it a cosmopolitan one.

This is principally the case because neo-medievalism draws attention to the way power flows below the state level in today’s international system- a feat that cosmopolitanism cannot account for due to its focus on transnational affairs. Today’s international system is awash with sub-state actors. Take the international economy for example: forty international cities account for ninety percent of global GDP alone. This is power that cannot be ignored: just ask transnational corporations. When Chinese officials in Beijing launched a spy-probe investigation against Coca-Cola in March of this year, the latter had little choice but to give in to this infringement of its trading rights such is the value of its Beijing market.

Neo-medievalism also allows us to better conceptualize the changing security landscape. It provides an analytical framework that accounts for the manner in which states have recently contracted sub-state actors to perform their security functions for them. A neo-medieval world thus accounts for Israel’s contracting of the British firm G4S to deploy 6,000 security officers in the West Bank. And, in a more recent example, for how the security firm Page Group has been contracted by the E.U. to protect its officials in Afghanistan.

A point also worth considering here is the importance of sub-state nationalism and loyalties in today’s world. Many cosmopolitan theorists have deployed Benedict Anderson’s concept of the imagined community to explain how global citizens will redirect their loyalties away from the state and towards an international society. According to this paradigm, human beings have no inherent or primordial attachment to the state; it is not biologically determined that we reify the state and today’s international system. Rather that we do so is a social construct. We attach loyalty to the state because society tells us to do so from our early education onwards: thus we are taught the national anthem at primary school, and participate in festivals that celebrate the nation such as Bastille Day in France. According to cosmopolitans, it is possible to ‘invent’ traditions that redirect our loyalties to the transnational level. Events such as international Human Rights Day, which falls on the 10th of December this year, are indicative of such traditions. Curiously however, cosmopolitanism leads us down a blind alley when it comes to sub-state loyalties. It cannot explain the importance of Basque nationalism, and the international consequences that this nationalism entailed as a result of ETA’s terrorist acts. In similar terms, it cannot explain the predominance of intra-state wars in today’s international system, wars that occur within a state, and which now outnumber inter-state wars by a ratio of 5:1. Take the example of Syria where the manipulation of sectarian loyalties by the Assad regime has led to a fully-fledged civil war. Cosmopolitanism cannot explain this conflict, whereas neo-medievalism’s emphasis on sub-state identities can at least provide us some grounding.

And this brings us on to a final important point. Neo-medievalism provides us with an analytical framework through which to examine the interactions between sub-state and supra-state actors. The Kosovo Crisis of the late 1990s is a key example of this: according to NATO official Jamie Shea, it was the direct appeals of Kosovans to the transatlantic organization that was part in responsible for the latter’s intervention in the region. Or as the academic Alex Prittchard has shown, a growth in European sub-state nationalist movements has occurred in recent years as a result of the threat of European integration.

A multi-layered world requires a multi-layered analytical framework. And it is here that neo-medievalism’s strength lies: it allows us to judge the interactions between the individual, state and supra-state levels. The result is clear: 2013 is not that removed from 1513. Welcome back to the medieval world.