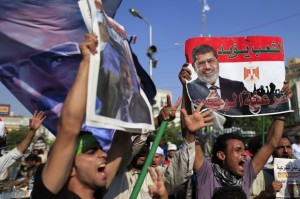 Throughout his lifetime, he emphasized on the importance of the ‘pure’ form of Islam, in an era where much of the Middle East was a colony of British, French and Ottoman powers. When created in 1928, the Muslim Brotherhood was an organization destined by its very nature to provoke a polarized reaction between western ideology and Salafi values. As a political party, it became the first mass-based, overtly political opposition to the ascendancy of secular and Western ideas. When we consider the rise of the brotherhood, the struggle for independence was gaining momentum at the same time as Wahabi warriors were being directed by the Ikhwan movement (which eventually helped the Al Saud clan to unite all the nomadic clans and established the modern state of Saudi Arabia). The name “Ikhwan” or brotherhood is still being used by the present day Muslim Brotherhood.

The Brotherhood gained its support base from rural areas to suburbs throughout Egypt, targeting poor neighborhoods, where they provided superior medical facilities to those run by the government, which were generally understaffed and expensive. The organization also ran numerous care centers for poor widows and orphans as well as training programs for the unemployed. Over the years, the political elites, who proclaimed themselves secular, created a class based system of their own; the patron-client relationship. Thus corruption and lack of governance striped away the benefits of the working and lower middle class. The failure of delivering the basics of the service would encourage the have-nots to blame the socio-political system, and at the same time indoctrinate Sayyid Qutb’s ideas.

Like any mature political party, the Muslim Brotherhood has gone through evolution, constantly adapting to changing circumstances. They have transformed their positioning through a priority based approach targeting the class of society that is least privileged. In later years, this approach clearly distinguished them from socio-political elites- mostly dominated by leftist army from the Gamal Abdel Nesser’s days. Firstly, different members of the brotherhood would focus upon the socio-economic interests of the working class community. Then they would approach the professional middle-class that had traditionally constituted the nation’s backbone; the last decade witnessed an unprecedented ascent of businessmen to senior positions in the Guidance Bureau and Shura Council.

Several members of these organizational bodies (as well as their business partners) have had a strong influence on the Brotherhood’s decision-making processes, through their formal and informal roles. Some of them operated as liaisons between the MB and Mubarak’s associates. After the revolution, the brotherhood ensured the support base of the business community, and brotherhood businessmen acted as a link  between the president and the business community. The process of inclusion took in Mubarak’s associates, and political and business elites. This strong support from the political elites ensured the organization enjoyed financial freedom, and also emphasized entrepreneurship to the religious minded; something that particularly appealed to the younger followers, whose lives previously lacked those economic opportunities enjoyed by the political, military and business elites during Mubarak era.

The grassroots outreach programs finally paid off as the brotherhood participated in the politics of post-Mubarak Egypt. Although as a political organization, it considered the different between religion and the state un-Islamic, the Muslim Brotherhood participated in the parliamentary elections after World War II. This tendency of the brotherhood would only grow stronger in later years.

Their biggest achievement came in the Egyptian parliamentary elections, with a major victory in 2012; 47.2% of the vote and 235 seats out of 498. This Islamist victory has not been unique to Egypt in recent years; the Middle East is currently experiencing an Islamist wave, with Muslim Brotherhood offshoots seeing gains in Tunisia through the Ennahda party, in Yemen as the Al-Islah party, and in Gaza through Hamas. In addition, the main Islamist party has had landslide victories in Turkey – a country where military and social secular elites have traditionally dominated the political scene.

Although the Muslim Brotherhood gained much of its success through mass mobilization of its supporters and resources, the lack of experience in governance ultimately cost them. In terms of foreign policy, it is clear that as long as the Egyptian army keeps the peace with Israel, and port Suez is fully operational, the US will continue to provide military aid and the support for the interim government. However, the US and the GCC leaders now have to live with the truth- Islamists are here to stay, and a liberal-Islamist compromise is a necessity in this transitional political landscape.