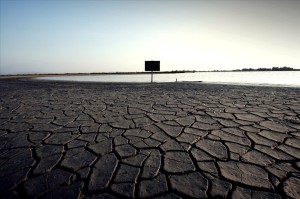 Desertification – only one out of many consequences of climate change (Source: Vincepal)

With the increasing severity of climate change and its associated impacts, and the political stalemate that is characteristic of international climate negotiations, a range of alternative attempts to mobilise political action on climate change have emerged. Of particular interest in recent years has been the attempt to link climate change with notions of security. This seemingly peaked in 2007, when the United Nations Security Council held a debate on the security implications of climate change. The United Nations General Assembly examined this issue in 2009, passing a resolution, and the Security Council held a subsequent debate in 2011. These particular interventions highlight the degree of international concern over the issue, as well as increasing frustration over the lack of political agreement in the United Nations Framework Convention for Climate Change (UNFCCC) negotiations, thus seeking an alternative approach.

Therefore, it is with the goal of political mobilisation in mind that these international interventions occurred. However, if we are to understand the importance of the link between climate change and security at the international level, including initiatives at the domestic and regional levels, then it is necessary to examine the evolution of thinking on the relationship between environmental change and security.

At the end of the Cold War, academics and policy practitioners alike welcomed the broadening of the scope of security studies to include issues other than traditional military concerns. This included a range of ‘non-traditional’ threats, as well as a range of actors other than the ‘traditional’ security provider – the state. Therefore, a range of analyses sought to establish a link between environmental degradation and security. In particular, work within this body of literature in the academic and policy worlds has typically been driven by two main arguments. The first, that climate change and environmental degradation are such important issues that they deserve elevation to the realm of security. In particular, this approach is coupled with the goal of political mobilisation: those in support of this approach typically argue that climate change and environmental degradation have not been appropriately dealt with in the realm of politics, and therefore by raising it up as a security issue, it will instil a sense of urgency and allow for a new response to the issue. On the other hand, there is an argument that climate change and environmental degradation pose a threat to the security of states, invoking the language of national security. This approach was prominent in the academic world in the 1990s, when a range of analysts talked of a ‘coming anarchy’ where the world would be thrown into anarchic chaos with conflict over scarce resources and population growth, or claims about ‘water wars’ and conflict over resources. In particular, links were made between environmental degradation, resource scarcity and conflict, with frequent reference being made to the Rwandan Genocide and the crisis in the Darfur region of Sudan.

By the middle of the 2000s, the link between environmental degradation and security began to feature prominently in think tank analyses and government foreign policy and defence documents (particularly in the United States, the United Kingdom and Australia). In particular, these reports typically framed the relationship between climate change and security from within a national security discourse, which privileges the security of the state. In both bodies of literature – that with the goal of political mobilisation, and the literature linking the environment with conflict – there is a ‘failure of politics’ implied. This built on the concern that climate change had not been adequately addressed in the realm of ‘low politics’, and therefore raising it up as a security issue should trigger a new response to the issue. However, little attention has been given to the international ‘securitization’ of climate change, which is problematic given the need for an international response to climate change.

The Security Council debates provide interesting examples of the problems associated with ‘securitizing’ climate change, particularly in the international realm. In particular, it illustrates the difficulties in framing a certain issue as a security concern, due to the range of different actors and opinions. In this case, climate change has been classified as national security issue, a human security issue and an international security issue, however there has been little consistency about who needs securing from what threats and how. Therefore, it is more important to how different actors advocate and contest different understandings of security, and how this informs policy responses to climate change.

The General Assembly and Security Council debates in particular illustrate the difficulties associated with framing climate change as a security issue, when there are so many competing understandings of what security is, who are the actors and institutions best equipped to respond to the issue, and the ethical considerations associated with climate action. Different answers to these questions have different political implications, and as a result, the extent to which climate change has been ‘successfully’ framed as an international security issue is still out for the jury to decide.