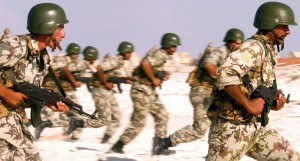 It is curious that not long before the events of 2011, Egyptians shared an expectation that Gamal Mubarak would inherit his father’s role as the country’s President. Although this was largely coupled with a negative sentiment, Egyptians generally accepted it in a passive aggressive manner. It appeared that Egypt was a dormant society, but over the course of the last three years, this view has been disproven over and over. All that was required was a spontaneous trigger to initiate the chain of events which, over the past three years, brought several governments and constitutions to Egypt. It is arguable that this trigger would not have amounted to the toppling of the regime without the military’s support. And so, the omnipotent presence of the military, a common denominator of pre- and post-revolution Egypt is worth questioning.

Since 1952, the absence of a stable political structure has seen the prominence of the Egyptian military remain the single most consistent factor in Egyptian political life. Amidst the arguable nature of the success of the January 2011 Revolution – and contentions as to how one might define the regime in relation to its participants – it remains clear that the military throughout has sustained its role as an ever-present institution within the political and social atmosphere.

So why is the Egyptian military as powerful as it is today? In 1952 the Free Officer coup d’état overthrew King Farouk, and the first President of Egypt who assumed power in 1953, Muhammad Naguib, was a member of the Free Officers. After Gamal Abdel Nasser succeeded him in 1954, the political power of military men grew exponentially. His tenure, which lasted until 1970, was marked with charismatic leadership and a strong relationship between the state and society. Nasser’s version of Arab socialism led to the expansion of the state apparatus, much of which was in the hands of his military confidants.

Anwar Sadat, who succeeded Nasser in 1970, was also a key player in the Free Officer movement. Empowerment of the army under his presidency was of a different shade: through the economy. His presidency was marked with economic liberalization, which meant the privatization of many of the industries, companies and resources that had been nationalized under Nasser. Given the trust between Sadat and the military, as well as the hastiness of his liberalization policy, many of the newly privatized industries fell into military hands. 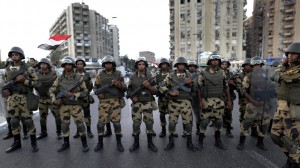 The Egyptian army is peculiar. It is an awkward in-between institution standing somewhere between society and the political realm. (Image: Hassan Ammar/AP)

Sadat’s Egypt was best characterized by rapprochement with the West, embodied in the neutralization of its relationship with Israel under the Camp David Accords in 1978. In predictable fashion, the U.S. responded to this in 1979 by providing the Egyptian military with generous aid. The influx of US resources and equipment to the military was steady under Sadat and Mubarak.

Despite the ideological differences between Egypt’s architects, they each exalted the role of the military in different spheres. The army reached a pinnacle power level with both political and economic force up its sleeve and, most importantly, has become deeply entrenched in Egyptian society. Although it appeared not to be an active political actor under Mubarak, this would be a very misleading perception. The army was, in fact, sufficiently satisfied with its infiltration of the social sphere and economic prowess (it controls roughly 40 percent of the Egyptian economy). This enabled it to exercise political force where it saw relevant. The evidence is that the demonstrations of January and February 2011 only translated to a revolution when the Supreme Council of the Armed Forces (SCAF) extended its support to Tahrir and replaced Mubarak.

The army’s involvement in 2011 was clearly not a coup d’état. But if you consider the army to be part of the regime, then can’t we say that what happened wasn’t a revolution at all? This is why the Egyptian army is peculiar. It is an awkward in-between institution standing somewhere between society and the political realm. The only way to justify this is through the historical narrative above: it indicates that the military gradually infiltrated Egyptian society and achieved economic leverage so as to become a power engine. Does this translate into political power?

I don’t believe that SCAF is interested in assuming direct political power. But to stand on the other side of the spectrum and say that SCAF is simply an institution overseeing the revolution (and many point to their support of the Tamarod Rebellion of 30 June 2013 as evidence) is highly reductionist. Although it was strategic about when to stand by protestors, this does not mean that the military will continue to act ‘altruistically’. Having such a powerful institution looming over Egypt’s political life raises serious concerns about accountability and lobbying in matters that the electorate is unaware of. The empowerment of civilian institutions is imperative in order to cultivate a healthy political infrastructure.

This article has originally been published by The Black Swan – A SOAS Student Perspective on international issues. You can follow them at @BlackSwanSoas
Related articles in the categories Democracy, Middle East and North Africa