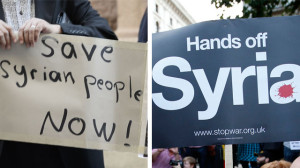 Recent days brought to the forefront a discussion that has shaped international politics for over two decades. International law and the Responsibility to Protect (R2P) are in the limelight once again. Experts advocating and opposing intervention have raised their voices. Both sides have a point.

Advocates of intervention point towards the Chemical Weapons Convention and International Humanitarian Law. Opponents of a looming intervention point out that an approval of the UN Security Council is required. In addition, interventionists compel to our human conscience and moral values and the phrase “never again” is once more underlined. On the other hand, the disasters of Iraq and Afghanistan cast a shadow on any possible intervention and its aftermath. But whose arguments weigh heavier?

International law – is it worth the paper it has been written on?

The purpose of law is to govern behaviour by establishing rules and guidelines.  Laws are based on and informed by our moral values and is hoped to establish order and stability. We respect domestic law in the hope that our neighbour does so as well and consequently our society remains stable. Respect results in legitimacy – the core essence of law. The lack of such would ultimately render the law ineffective, and therefore engender the collapse of social order.

The decades following World War Two witnessed a proliferation of international law, mirroring the lessons learnt from history. International law, unlike domestic law, lacks enforcements and is subsequently based on nothing beyond the hope that State A respects international law under the assumption that State B does so in return. Without a high degree of legitimacy, international law and the bodies attempting to hold it up are likely to become irrelevant. But for it to be perceived as legitimate, it needs to be applied and, as far as possible in the international sphere, be enforced. Breaking the law must lead to punishment for it to be taken serious.

Again and again we are reminded that according to international law, humanitarian interventions require the approval of the UN Security Council. Intervention without such approval would lead to the erosion of international law. But who is to blame? States that take decisive action to protect humanitarian law – a task that the UN is supposed to fulfill? Organisations that struggle to fulfill their purpose lose inevitably legitimacy and others step into their place. Thishas been clearly observed during the Kosovo War in 1999.  The UN, as I have argued in another article, is not fit for the challenges of the 21st century and runs the risk of losing legitimacy and consequently influence. Of course power politics is mostly to blame. However, if power politics represents an obstacle for the protection of international humanitarian law, the UN needs to be reformed in order to minimize the risk of deadlocks that result from this issue. If the UN wants to play an important role in the 21st century, it needs to address first and foremost the need of people whose lives are at risk. The needs of all other parties are secondary. This is not a call for states to ignore international law, it is a call for the UN to become more effective in order to preserve the legitimacy international law. An amendment of the trigger mechanism for humanitarian interventions would be a step in the right direction.

Witnessing the disasters in Afghanistan and Iraq, it is only all too clear why states are wary to commit to a mission in Syria. International law has an inherent weakness as it cannot be enforced; the lack of punishment of Assad would reinforce this weakness and subsequently, as argued above, international humanitarian law will lose legitimacy and might be simply ignored in future. Hence, non-intervention might set a precedent here for future governments that engage in killing their own people.

We have all heard the phrase “never again”. Never again did we want to stand as civilians are killed by power hungry dictators. The Holocaust, Bosnia, Rwanda were all followed by this phrase, but right now it happens again in front of our eyes.

However, efforts have been made. “Never again” was hoped to become reality when the doctrine of “Responsibility to Protect” (R2P) was adopted. R2P represents an emerging norm and principles that claim that sovereignty is not a right, but a responsibility. Mass atrocities, such as genocide, war crimes, crimes against humanity and ethnic cleansing are all hoped to be halted by R2P.

R2P provides a framework that suggests the use of mediation, sanctioning and force according to Chapter VII in order to avoid or halt mass atrocities.

These measurements are summarised in three pillars:

1. The State carries the primary responsibility for the protection of populations from genocide, war crimes, crimes against humanity an ethnic cleansing.

3. The international community should use appropriate diplomatic, humanitarian and other peaceful means to protect populations from these crimes. If a State fails to protect its populations or is in fact the perpetrator of crimes, the international community must be prepared to take stronger measures, including the collective use of force through the UN Security Council.

Source (International Coalition for the Responsibility to Protect)

Pillar three emphasises diplomacy and has been followed through in Syria for the last two and a half years. A basic rule of conflict resolution is that parties have hardly any incentives to join mediation or negotiation as long as there is a power discrepancy. That is, Assad is unlikely to join negotiations before a stalemate exist as the use of force is likely to promise higher rewards for him than a peace agreement. Russia plays a crucial role and could exert pressure on Assad. This pressure might lead the conflict towards a stalemate, but so far Russia has failed to use its leverage and as a consequence diplomacy is likely to have reached the end of the road. 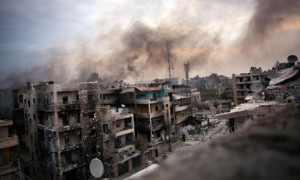 Critics often mention the risk of the establishment of a Jihadist state or point towards the deadly affects of a lack of planning for the post-war period in Iraq. These concerns are real, justified and need to be taken into account. However, these are concerns, not facts. One fact is, however, that Assad’s regime has killed over 100,000 people and continues to do so.                             A humanitarian intervention in Syria does not solve the conflict, it is merely hoped to minimise overt violence by reducing the capability of the Syrian Government to kill its own people. For example, David Cameron has emphasised that there is no assurance that intervention will shorten the conflict. Indeed, there is not even a guarantee that Assad will join negotiations. But an intervention increases the possibility to tip the balance of power which might convince Assad to join peace negotiations. It also entails that the international community makes sure that the FSA joins the table rather than prolonging the conflict. Afterwards democratic forces need support on a large scale in order to reduce the influence of Jihadists.

Critics also point towards Libya and Kosovo, claiming that the NATO led intervention has not pacified the countries in question. However, NATO states did not claim that intervention would do so and what would have happened without NATO intervention? Would Kosovo and Libya now better places to live? Critics often do not address this question.

Let’s look at both sides of the coin

If there are to be attacks in Syria after the intervention, critics are likely to claim that they have warned us beforehand. However, how many people would have died without the intervention? In order for our arguments to be valid, we need to look at both sides of the coin. Merely to look at one side and to point out possible risks whilst ignoring the other side is not only resulting in flawed arguments, it is also costing the lives of people. Thus in order for us to have an honest and well informed debate, we need to look at the risk of action and inaction.

The conflict parties in Syria are locked into a bilateral monopoly, that is they cannot avoid each other in future and have to live together instead. An intervention can only establish negative peace. Positive peace can only be built and maintained by Syrians themselves. This will be a lengthy process that is likely to be shaped by many setbacks. However, getting the parties to the negotiation table will be a first step.

Often opponents of humanitarian interventions point out the need for a strong response whilst simultaneously ruling out the use of force. However,with regards to Syria they have not yet told us what their “strong” response might look like. To be against an intervention without having any credible alternative does not help the people of Syria.

We seem to live in a society where people or states that took action have to justify themselves later if the intervention did not bring about the hoped outcome, whereas people who took no action do not have to explain to society and, most importantly, the victims of conflict why more people had to die while they stood by. Not only the use of chemical weapons, but the killing of over 100,000 people cannot be left unpunished. Remember, we said “never again”.