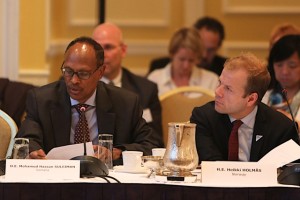 What can be done to avoid such incidents in the future and help Somalia on its path to stability? A relatively new framework: “The New Deal for Engagement with Fragile States” (New Deal) might just do the trick. Last year UN Secretary General Ban-Ki Moon stated: “we committed to a new Somali-owned and led partnership, which will work towards a compact between the Somali authorities and the international community inspired by the principles outlined in the New Deal.”

What is the New Deal, and what does it do?

The New Deal was driven by a group of fragile states, the G7+, and formally established at the High-level forum on Aid Effectiveness in Busan, in 2011. It uses five peacebuilding and statebuilding goals, revenues and services, legitimate politics, security, justice and economic foundations as a guide for progress. The difference with many ‘older’ development models is that the process is vitally driven by fragile states themselves. This is achieved through an initial fragility assessment that results in a country-led and country-owned vision for projects, which also sets the priority areas for the disbursement of aid in line with the New Deal principles of transparency, risk sharing and strengthening in country systems.

Underpinning this whole process is a long-term approach as there are no quick fixes for instability. Liberia’s vision to become a middle-income state by 2030 is a case in point. Liberia’s Finance Minister Amarah Konneh highlighted at the Third International Dialogue Meeting in Washington in April, that through the New Deal, Liberia worked on better public financial management to increase benefits coming from the forestry and oil sector. The beneficiaries of these resource revenues in Liberia are social programs.

So if the New Deal approach of having peace as development objective and country-ownership is so positive, why then was Uluso so downbeat about the prospects of Somalia?

The reason lies not in the principles of the New Deal itself, but rather the commitment to its application by international partners, he said that for all the federal government’s optimism they must ‘take account of the reluctance of the international community to embrace the New Deal commitments and plan for such predicament’. 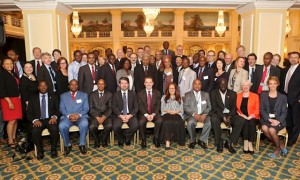 Slow pace of implementation of the New Deal

Uluso has a point. Implementation has been sluggish. As Mark Tran noted in The Guardian, donors remain reluctant to shed the old approaches, including using their own consultants and foreign advisers, instead of using recipient country systems. The use of parallel systems – which duplicate existing resources, are expensive and do not build expertise in developing countries – are still the norm. This shows a lack of trust, especially as donors are under domestic pressure to value for money in aid budgets.”

Where New Deal principles have been implemented there has been some signs of success, most notably in the pilot countries Timor-Leste and Liberia. “Since 2003, Liberia has transformed itself from a failed state to one that is well along the path to democracy and lasting peace,” said Karin Landgren, Head of the United Nations Mission in the West African country. Liberia’s economy recorded its eighth consecutive year of post-war growth in 2011. Of course neither country has transitioned to peace without problems, Liberia is yet to deliver on its transparency promises with allegations of endemic corruption, nepotism and poor government performance surfacing time and again. “It’s no easy task to re-build after a descent into conflict. Fragile and conflict affected states – stretching from Africa to the Pacific – pose daunting development challenges,” said President of the World Bank Jim Yong Kim last month in an op-ed about the importance of the New Deal for a different engagement with fragile states.

Regional solutions and cooperation needs to be strengthened

Despite, or because of, the rocky path ahead, Somalia has stated it will conduct all its development through the New Deal, and has reaffirmed its commitment to its principles with support from the G8 countries. It is questionable, however, just how much the G8 countries can contribute to the 19 G7+ and their economies, especially in the face of faltering economies at home. Many economists, most notably Paul Collier in his bestseller The Bottom Billion, have highlighted regional cooperation and trade to boost infrastructure investments and GDP growth.

Somalia is in direct vicinity to Kenya, Tanzania and Rwanda. Countries with stable economies, strong governments and more or less united populations. Tanzania’s peaceful transition into independence has developed into a multilingual, multi-ethnic and multi-religious hodgepodge that somehow manages to produce a GDP growth of 6%. Tanzania’s prospect of becoming a middle-income country by 2025, despite major historical, geopolitical and regional challenges could contribute valuable lessons to Somalia’s efforts.

The New Deal’s principle with its emphasis on country-owned and country-led solutions is a progressive and promising agreement that needs support from all sides. This can only happen if it pursues its path of inclusivity and encourages a variety of actors to join.