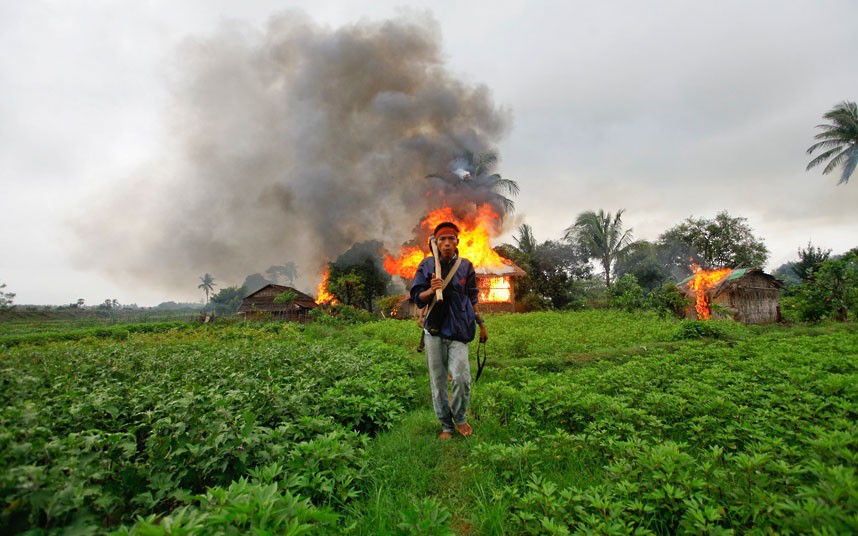 A Rakhine man in front of houses that were burnt during fighting between Buddhist Rakhine and Muslim Rohingya communities in Sittwe (Picture: REUTERS)

In recent years, international attention on Myanmar (historically known as Burma), has revealed many developing stories. One story currently ongoing is that of the Rohingya Muslims, an ethnic minority group who are not officially recognized by the government of Myanmar.  With a population of more than 800,000 people, the Rohingya Muslims struggle to find a voice, as Myanmar has more than 52 million people, comprised of 135 different ethnic groups.

The name “Rohingya” is disputed amongst historians, some claim the name originated in the 1950s, while others state that “Rohingya” date back from the 18th century, stemming from the name “Rooinga”. Perhaps where most of the confusion stems from today is that the majority of Rohingya Muslims are viewed by many in Myanmar as illegal immigrants from Bangladesh with no historical presence in Myanmar. Many Rohingya Muslims argue that they have been living in Myanmar for generations, and ought to be recognized as citizens.

Recent evidence has shown that the Rohingya Muslims are being discriminated in numerous ways, as permission is needed to get married, child limitations are imposed, and there are difficulties in accessing higher education. There have also been reports of brutality towards the Rohingya Muslims, including incidents of torture, rape, and human trafficking. Since 2012, more than 280 Rohingya Muslims have been killed, with thousands more displaced, due to the ongoing conflicts in Rakhine state.

As a result of the current situation, international aid groups assisting the Rohingya Muslims have recently been reduced and relocated.  Many discussions between the United Nations and the Government of Myanmar have taken place, urging for the safety of humanitarian workers, so that they can continue helping the Rohingya Muslims. With many international aid groups providing psychosocial support and proper health care, having the humanitarian workers return in full capacity is crucial, as thousands of Rohingya Muslims are suffering from acute malnutrition.

Limited International Attention by the Media

The Rohingya Muslims have been overlooked by many media outlets (particularly on television), with only a few sparse reports trickling in occasionally. Petitions have been made to further address the media silence, in the hopes of bringing the plight of the Rohingya Muslims to the forefront of international media.

This lack of international media attention might be because of the difficulty in obtaining accurate news reports, as conflicts between the Government of Myanmar and international media outlets make it difficult to know what events are actually occurring in Rakhine state.

Recognizing the Rohingya Muslims will help improve Myanmar’s image internationally, and will further attract more companies and tourists, which will help Myanmar not just economically, but politically as well. Because of Myanmar’s recent reforms, economic growth is now on the rise, with many international companies now doing business in Myanmar. Some well-known companies include Coca-Cola, General-Electric, PepsiCo, and Samsonite, and the list is ever-expanding. However, the ongoing conflicts in Myanmar, particularly that of the Rohingya Muslims, may cause many other companies and tourists to hesitate in setting forth in Myanmar.

In addressing the plight of the Rohingya Muslims, the Government of Myanmar published a press release, expressing that interfaith and community dialogues have taken place in Rakhine State.  The Government of Myanmar further stated that it will take some time for Buddhists and Muslims to live side-by-side in order to gain confidence and trust with one another. However, more needs to be done in the short-term.

International Precedents in Recognizing “The Other”

Unfortunately, there are far too many groups around the world who are unrecognized. However, in recent years some countries have recognized those who have not had a voice. One country that has received international attention in the last few years is Australia. An apology to the aborigines was publicly issued by Prime Minister Kevin Rudd, recognizing the suffering they endured and the hope that a new chapter in Australia’s history can be created by solidifying everyone as equals.

In the past, many aborigines have not had the same economic and educational opportunities, and new policies are being created to address these disadvantages. Since the apology was offered, changes to the constitution are ongoing in removing discrimination of the aborigines. National Sorry Day in Australia has also become more prominent, with many schools participating in recognizing and offering condolences to the aborigines and sharing dialogues together.

By showing further support for the aborigines, more opportunities for the indigenous people can be created (especially in tourism), which in turn can help the economy as well. If Australia can help create more peace in the nation by recognizing aborigines, a similar course of action in Myanmar should also be considered.

The Path for Peace

One other very important reform that should occur is allowing Aung San Suu Kyi to run for president in 2015. Suu Kyi is currently unable to be president of Myanmar, as the current constitution prohibits her candidacy due to her foreign family. Suu Kyi married a British husband, Michael Aris (he passed away in 1999), and raised two children.

If Aung San Suu Kyi is elected president, further dialogues may be able to take place in acknowledging the Rohingya Muslims, as she is in a unique position of being recognized around the world, and will thus be able to gain more international support in bringing peace to Myanmar.

In addition to Suu Kyi being the recipient of many awards, including the Nobel Peace Prize, she also is the daughter of General Aung San, who is known by many as the founding father of Myanmar, and helped shape its independence from Britain. General Aung San ushered in a new era for Myanmar, and perhaps his daughter will be able to continue his legacy. During the Nobel Lecture, Suu Kyi emphasized human rights and a strong belief in democracy that will help bring peace in Myanmar and this would provide her with an important opportunity to turn her words into concrete actions.

While recent reports have criticized Suu Kyi in being silent during the Rohingya’s suffering, many still view Suu Kyi as the best candidate for presidency. Perhaps becoming president will allow Aung San Suu Kyi to properly address the ongoing conflict, as many believe she is the image of peace for Myanmar. The next few years will be crucially important for Myanmar, and hopefully counting in the Rohingya Muslims and addressing their historical presence can help lead Myanmar on a further path to peace, which in turn, will usher in greater prosperity.