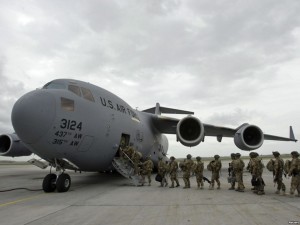 The U.S. began using Manas in 2001 to support counterinsurgency operations in Afghanistan,…

After years of negotiations, threatened evictions, and rent hikes, the Kyrgyz national government has settled on the decision to evict the United States from the Manas Transit Center at Manas International Airport removing troops in July 2014. The U.S. Defense Department announced on 18 October that the United States began the transfer of the site to the Kyrgyz Government.

The United States had intended to use the transit center for withdrawing U.S. troops after U.S. forces leave Afghanistan. Now the U.S. is relying on Romania to complete the withdrawal at the Mihail Kogalniceanu Airbase. The U.S. began using Manas in 2001 to support counterinsurgency operations in Afghanistan. It was the only airfield that could support operations in the region and is the only one of three bases in the region that had sufficient refueling services. Upon vacating the transit center, the United States will be scrapping or destroying equipment making Manas less of a logistical asset than first thought.

The U.S. presence in Kyrgyzstan can be viewed as a possible deterrent against extremists and terrorists who desire to become active in the country as the region has experienced a sharp increase in extremist and terrorist activity over the last decade. Throughout the region, extremist activity is on the rise with groups such as Hizb-ut-Tahrir growing in number, bombings in Kazakhstan claimed by the group Jund al-Khalifah, Jamaat Ansurullah calling on citizens to participate in jihad against “infidels,” and the Islamic Movement of Uzbekistan which is a threat to stability in Uzbekistan and to the region.   The sharp increase is in response to oppressive governments, oppressive government policies towards Islam, pushes for secularism in society, and poor economic and social conditions have led to these activities.

Even though the U.S. may act as a deterrent, President Almazbek Atambayev and former President Bakiyev have viewed the base as a political liability. Addressing the post-2014 situation, President Atambayev, said the country will reinforce its border with Afghanistan to prevent militants from entering. The fragile Kyrgyz government and the fragile civil society— caused by ethnic tensions, poor economic conditions, and Kyrgyzstan’s penchant for protesting and the population asserting their political will— create an attractive destination for extremists so the effects of the closure are two-fold.

The closure strengthens the military and political relationship between Kyrgyzstan and Russia. Russia has long been suspected and identified as the driver behind the negotiations over Manas, and ultimately the closure. In September, Kyrgyzstan extended the lease of the Russian Kant airbase until 2032 in exchange for Russia forgiving Kyrgyzstan’s $500 million debt. Russia has already promised a 1.1 billion dollar USD defense arms package to bolster Kyrgyzstan’s defenses. Russia seeks to have more dominance in the region supporting the idea that Russia is dragging its “near abroad” countries (the former Soviet Union countries) closer to form an organization of former Soviet Union countries. 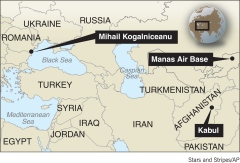 …now the U.S. is relying on Romania to complete the withdrawal via the Mihail Kogalniceanu Airbase. (Image: Bev Schilling / Stars and Stripes)

The closure will benefit Russia as the U.S. does not have many options in the region. Tajikistan was the U.S.’s best option, but the Russians already have the 201st Military Base with 7,000 troops stationed there. RIA Novosti reported on October 7, that the Tajiks have extended Russia’s lease to the year 2042. The Russians have expressed interest in leasing the Ayni airbase as part of the base deal.

The biggest impact is that the closure will cost Kyrgyzstan $60 million dollars USD per year; Kyrgyzstan’s GDP is only $6.47 billion USD. Manas contributed $145 million USD annually to the Kyrgyz economy. Kyrgyzstan will feel the full affects of the closure in 2015 where the revenue collection gap is $120 million USD. According to October 2013 information from the U.S. State Department Bishkek Embassy website, subtotal direct expenditures totaled $101,875,261 USD. This includes the rent for Manas, contracts, leases (excluding rent), airport improvements, aircraft-associated fees, passes and utilities. Indirect subtotal expenditures listed solely as military local spending totaled $2,155,768 USD. The Kyrgyz economy expects to lose 30 million dollars in 2014. The amount of contributions or money spent to maintain Manas and the Kyrgyz government and economy the economic damage will be greater. According to a March 2013 report by EurasiaNet, stolen goods from Manas contributed to an underground market for high-end gourmet foods notably, steak, crab, and kilos of bacon that sold for $7.50 USD each. The theft is suspected to be linked to the country’s organized crime groups costing the base $40,000 USD from January to March 2013. According to the report, jellybeans were stolen years before as thieves strapped bags to their chests. Businesses around Manas will also feel the pinch.

According to AKI Press on October 30, the Kyrgyz government expects to compensate losses from the Transit Center closure with the launch of an oil refinery in Kara-Balta, and additional gold production at Ishtamberdy, Bozymchak and Taldybulak Levoberezhnyi mines. Ishtamberdy is Chinese operated, protested by Kyrgyz locals, and has experienced some controversy including Full Gold Mining JSC threatening to cease operations in September 2013. Kazakhstan’s Kazakhmys incurred an impairment charge last year of $162 million USD against the Bozymchak gold and copper project which reveals a higher operating risk in Kyrgyzstan. At the Taldybulak Levoberezhnyi gold mine, production is not expected until June 2014 according to AKIPress; the mine has already experienced backlash from locals. Due to the political and economic climate, the mining ventures do not seem viable. The closure will have an indirect economic impact as it might decrease the potential for foreign investors due to past protests over Manas and Canada’s Kumtor gold mine and emerging anti-Western attitudes. Kyrgyzstan’s inevitable participation in the Customs Union (accession beginning in December 2013) and Eurasian integration will help the country expand its economic partners.

Once the U.S. leaves, Manas will strictly be a civilian airport. Manas International Airport already supports civilian flights. The airport serves 1.1 million passengers annually, but with the closure of Manas, that number is expected to be half, costing Kyrgyzstan nearly 7.65 million dollars annually. Manas Transit Center has also contributed to community projects such as repairing a school in Tort-Kul village and installing vinyl windows at a perinatal facility in Bishkek assisted by USAID. The government has repeatedly stated that Manas will not become another transit point. The Kyrgyz government has seemed to benefit from the closure politically, but economically the costs seem too steep. Russia and other regional partners may not be able to compensate for the economic damage and the loss of jobs among Kyrgyz nationals. Existing political instability will only make the recovery more difficult to achieve.