Last year Argentine President Christina Kirchner publicly argued for a reassessment of who should control The Falkland Islands. Bizarrely, Hollywood actor Sean Penn felt the need to get involved in the debate too, arguing, like Kirchner, that Britain’s administrative control over The Falklands is “colonialism”. Quiet now Sean.

Tensions between Great Britain and Argentina rose ever so slightly; there was some chatter in the United Nations, Kirchner stuffed a letter into the hands of British Prime Minister David Cameron, and some British flags were burnt in Argentina. But, months had passed since any further developments on the issue, and a new year has begun. It would have been fair to say that the Argentine grievance over Britain’s limited control of The Falkland Islands had been dropped by the Argentine Government (and our knowledgeable expert on foreign affairs, Sean Penn, of course). How wrong this writer was 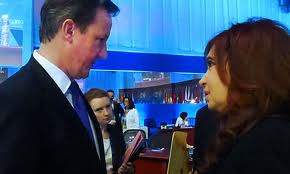 It has only been two weeks into the New Year and Kirchner has decided to bring the issue up again, more publicly than before. In a display of megaphone diplomacy – which could hardly be called ‘diplomatic’ – President Kirchner wrote an open letter to Prime Minister Cameron in The Guardian, reiterating last year’s assertions by implicitly stating that British rule is colonialism manifest, and more overtly that Britain should handover its limited control of the Island to Argentina post-haste. She also gave a largely false and biased account of history (see my previous article on the history of rule in The Falklands) and failed to take into account the upcoming referendum that is recognised as legitimate by the United Nations.

In riposte to President Kirchner’s unfounded remarks that the limited British control of The Falklands is colonialism, the Falklanders themselves have had something to say back. Speaking in June last year Gavin Short, a member of the Falkland Islands Legislative Assembly remarked, “we [the Falklanders] have decided, with the full support of the British Government, to hold a referendum on the Falkland Islands to eliminate any possible doubt about our wishes [to remain a British Overseas Territory].”

The referendum question will read:

“Do you wish the Falkland Islands to retain their current political status as an Overseas Territory of the United Kingdom? ‘YES’ or ‘NO’”

The referendum, which will take place in March of this year and will be the decision of the Falklanders alone, is likely going to be a landslide in favour of remaining a part of Great Britain. In light of this referendum, it baffles any observer that President Kirchner would continue her strange and illogical argument by writing her open letter, causing this unnecessary fuss and holding press conferences on this issue, especially when Falklanders are due to exercise their right to self-determination with a democratically held referendum where international observers will be present. Argentinians should carefully consider who they choose to represent them on the world stage in future general elections.

President Kirchner must know something that only people privy to her cabinet meetings do, because this writer, and anyone else for that matter, will fail to understand her recent actions in light of the forthcoming referendum.

Has she worked out the mystery of unearthing the Falkland’s supposed oil wealth? Does she just enjoy stirring the proverbial pot every once in a while? Or is she looking to assert Argentina’s place on the World stage by aggressively pursuing control of the Island. If it is the latter, and the faint possibility of Argentine military intervention in the Falklands becomes a reality, in spite of the upcoming referendum, President Kirchner would be no less a symbol of colonialism than the Great Britain of a by-gone era.

The results of the March referendum remain to be seen. But, the resolve of the Falklanders is clear: they intend to show, through democratic and internationally observed means, that they wish to remain a British Overseas Territory. That the president of a country that has previously invaded The Falklands seems determined to ignore the will of the Falkland people is alarming. Observers around the world in March will be keenly hoping that when Falklanders go to the ballot box and make their intent clear, President Kirchner acknowledges this and moves on, for the sake of international peace and cooperation. If she does ignore the referendum come March then it will leave observers wondering what her next move will be. It is highly unlikely that a second invasion would occur, given Argentina’s weak military capability and its devastating defeat in the previous Falklands campaign. But, observers should not take President Kirchner’s resolve on this issue lightly; she is a determined leader that has already made some rash decisions.