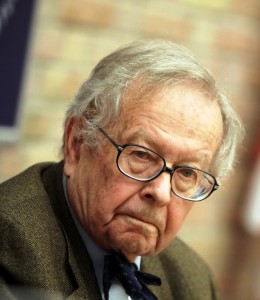 Yesterday brought the sad news that one of the pioneering scholars of International Relations, Kenneth Waltz, had died at the age of 88, as a result of medical complications associated with Pneumonia.

Though I do not know much about the personal life of this man, he has heavily influenced the thinking of every academic in the field of International Relations, transforming the subject through his theory of Neorealism. Waltz’s explanatory framework introduced to us concepts such as the ‘levels of analysis’ and ‘international anarchy’ that are taken for granted by many students and scholars alike, particularly realists like myself, who use both concepts regularly.

On a personal level, the work of Kenneth Waltz has influenced me since my first seminar on International Relations Theory. To be introduced to IR, was to be introduced to the domineering school of Neorealism, a juggernaut that swept away all before it, and his logical application of international structures dominating actors has endeared me to realism ever since.

Within my dissertation, I referenced Waltz twenty-five times. Without his pioneering works Man, the State, and War, and Theory of International Politics, I doubtless would have been able to even begin my work, let alone write ten thousand words on the theory of IR. For this, I will forever remember the scope and scale of Waltz’s achievements, and the impact that he had upon the subject I was fortunate enough to become acquainted with.

Waltz was not a scholar who separated himself from reality by hiding in a theoretical ivory tower. He contributed regularly to practical issues, and was always sceptical of events blown out of proportion. He stuck to his guns, and logically dismantled the cases for US military action in both Vietnam and Iraq, advice that, unfortunately, was not heeded.

He stayed true to his theoretical arguments to the very end, only last year arguing, controversially for some, that the Middle East would benefit from Iran attaining nuclear weapons capability.  He was almost always correct in getting straight to the crux of an issue, and evaluating outcomes.

Even now, as I work through my latest article (on NATO, to be published soon!), Neorealism is at the forefront of my mind.

For this, Kenneth Waltz, I salute you.