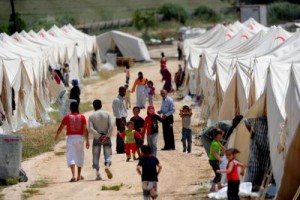 A key argument for military intervention in Syria rests on the assumption that all non-violent options have been exhausted. The UK government made this very claim in a document intended to provide a legal justification for war ahead of Parliament’s vote on the issue. In actuality, it is highly contestable that there has been a real and substantial effort to alleviate human suffering resulting from this conflict. Stephen Walt recently wrote on the diplomatic efforts that remain viable options to bring a halt to the violence. Even more damning is the record of the UK and US on humanitarian relief issues, particularly when it comes to the two million Syrians that have already fled the violence by crossing into bordering countries.

In the early months of the Syrian civil war, Benjamin A. Valentino made the case that “The first order of business, then, should be for outside powers to keep their borders open to victims fleeing violence….The international community should also ensure the survival of refugees once they reach their destinations. The conditions awaiting most refugees of mass violence seldom provide much better odds of survival than do those faced by victims who remain behind” (Foreign Affairs 2011). Instead, the UK has virtually closed its borders to Syrian refugees, and the Obama administration only recently paved the way for approximately 2,000 refugees to resettle in the United States in 2014. These countries along with the international community are not doing much better when it comes to assisting refugees residing in neighboring states. The Syria Regional Refugee Response has estimated it needs $3 billion to respond to the current crisis, but only 40% of these funds have been pledged. For its part, the U.S. has contributed $228,460,000. This figure may seem substantial, but it is tiny compared to the most conservative cost estimates of military intervention.

Without operational details, an exact dollar amount for military operations is impossible to estimate. At minimum, however, the most limited military strike would cost at least $1 billion according to a letter submitted to Congress by the Chairman for the Joint Chiefs of Staff, General Dempsey. He also explained that the operation would cost a great deal more if the objective was to prevent the regime from using or proliferating chemical weapons. For reference, it may be helpful to know that each Tomahawk cruise missile costs $1.4 million. Conservative estimates of the U.S. portion of the Libyan operation have been calculated at $1.56 billion.

In other words, for the price of a limited military operation with unclear objectives, the U.S. could be providing aid to millions of refugees. Beyond humanitarian relief, such actions might also be a more effective way to enhance our security interests. The millions fleeing Syria are having a destabilizing presence on the surrounding countries, particularly in Lebanon and Iraq.  Likewise, the citizens of Jordan and Turkey are also beginning to fear that it is just a matter of time before the violence spreads across their borders. Assisting these countries with the refugee crisis may go a long way in preventing the contagion of violence further destabilizing a vulnerable region.

Of course, national budgets cannot simplistically transfer funds from the military to humanitarian relief. As a society, however, we can consider what we are willing to spend on bullets as compared to providing the most basic of human necessities — food and shelter — to the most vulnerable victims of violence. Moreover, our humanitarian obligation to provide assistance remains whether or not the U.S. decides to engage in military strikes. A positive result of the recent attention to the Syrian crisis would be if citizens of the U.S. and other western nations did more than simply communicate through their representatives whether they support a military intervention but also insist on a generous commitment to humanitarian relief.

American presidents are fond of describing the U.S. as a shining city on a hill; it is time that the light emanating from the West reflected our hearts and not just the glow from our bombs.