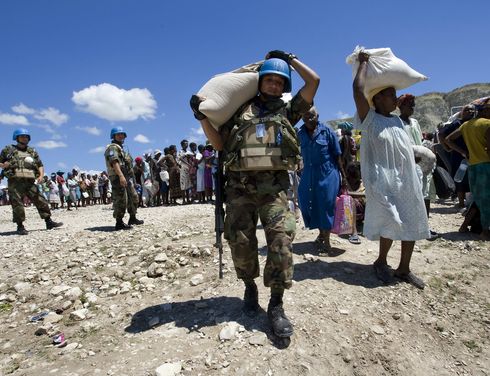 A United Nations soldier, part of the multinational peacekeeping mission in Haiti, helps a local woman carry donated food from a distribution center.

With the Millennium Development Goals’ (MDGs) target date of 2015 almost upon us, it is notable that most development goals in fragile and conflict-affected states will not be achieved. Fragile states, although making some progress, are the furthest away from achieving the MDGs. The New Deal for Engagement in Fragile States, currently being piloted in seven volunteer countries, was approved in 2011 to address the fact that programming in conflict-affected states needs to be approached and planned differently to other development programmes. Donors and implementing organisations nonetheless continue to use traditional development tools and programming methods. Given that fragile states often have weak state governance and are beset by outbreaks of violence and conflict, one must question if the sole use of development toolsets is appropriate.

Development programmes underline the need for state leadership. However the very definition of a fragile state is one where the government cannot perform basic functions. The New Deal guidance specifies that plans must be country-led, but how is this practically possible with a government that does not have state control? Weak state institutions lacking the capacity to process large sums of financial aid give opportunities to corrupt officials to take advantage of the state’s inability to monitor financial flows. Money can be siphoned off to line pockets rather than contribute to helping those in need.  The issue of ensuring development aid is reaching those in need has received increased attention in recent years. Important steps are being taken, nevertheless traditional development models continue to be used which do not encompass the particularities of fragile states.

Preparing a State for Development Work

It is widely agreed that violent conflict is a barrier to development. However, stabilisation programmes are still planned and implemented alongside development programmes. For development programmes to be successful, these barriers must be addressed. Conflict and violence increase poverty and displacement of people, often leading to terrible human rights abuses protracted through the difficulty of delivering support in areas of conflict. Economic interests can be exacerbated during a conflict and result in high unemployment, disaffected youth, and lack of basic public services. Under a government not able to satisfy basic public needs, for example the provision of food, the rule of law or functioning healthcare systems, an affected population can develop an attitude and behaviour that actually perpetuates a conflict. Rebel groups themselves further aggravate these causes of conflict. Their actions to secure power expand beyond military activities by offering to provide services for a population to entice support: the Taliban have in the past gained support through the provision of a justice system that, whilst lacking in legal credentials, can act swiftly and decisively. 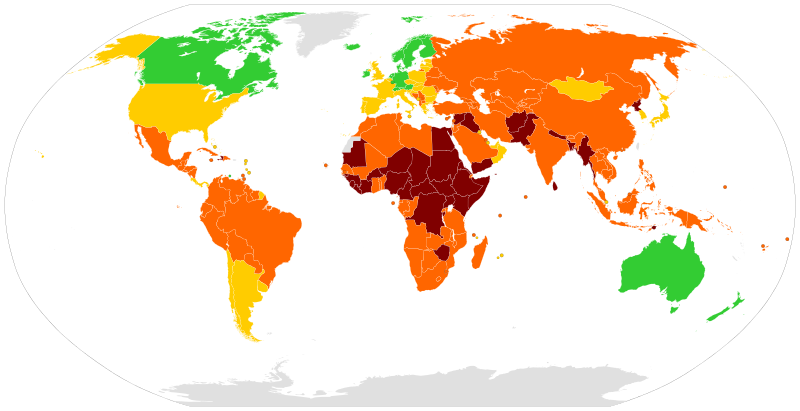 Donor funding for fragile and conflict-affected states has traditionally fallen within the aid and development departments. OECD DAC guidelines issued in 2006 state that donors should apply ‘whole-of-government’ approaches to development assistance. To date, the recommendation has not been turned into practice. In early 2013, David Cameron suggested that non-combat support missions by UK forces could partially be funded by the UK’s aid budget. This could be achieved through the DFID-MOD-FCO joint Conflict Pool funding mechanism. But this does not necessarily result in closer cooperation between the defence, development and diplomacy departments in design or implementation of programmes. Language differences between actors (for example development and security terminology), diverging departmental priorities and methodologies are some of the disincentives which prevent government departments from working more closely together.

If donor programmes for fragile states used planning models and tools that are specific to the conflict and stabilisation context, rather than the development context, it would not solely use development language. This would also help the departments to work together through creating a framework that uses the different department skillsets and tools.

Where money is being spent on development programmes, there is an effect on local communities and a country’s future. Most concerning is that without careful planning and failing development goals, donor money could result in undesirable effects. Making this kind of institutional shift will be a challenging task, and will no doubt take many years. There will be inevitable resistance from some practitioners and it will take a strong and strategic actor to mandate and truly alter these set processes. Hopefully, commitment and patience to achieving sustainable development in the long-term will prevail.

Related articles in the categories Development, Peace Building and Reconciliation