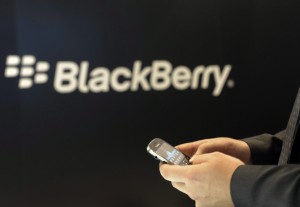 Blackberry is inherently be connected with the Canadian identity. (Source: The Canadaian Press/APdapd, Berthold Stadler)

For those not privy to such information, Blackberry, the Waterloo, Canada based phone/software provider is in trouble of falling as a publically traded company.  The downhill spiral is complex and understanding the ‘undoing’ of Blackberry cannot be narrowed down to one conclusive reason and more generally not fully understood beyond the simple statement: Blackberry is imploding. The ‘truth’ of the matter is that several influencing factors almost certainly plague Blackberry’s decline, which include, but are not isolated to added competition in the smartphone market, botched product launches because of software kinks, and more generally an inability to evolve with customers’ demands.  Beyond this, the Blackberry example provides important insight that highlight connections between Canadian identify and constructing political reality.

Adding to the speculation of the Blackberry spiral is not the purpose of this article, at least explicitly.  Rather the intention here is to contextualise Blackberry’s decline in the soft power literature and learn if or how this will shift the consciousness of Canada’s image abroad.  Admittedly this piece covers a vast scope and has obvious empirical fissures.  With that in mind, however, the point here is not to offer conclusive answers, but rather to broaden the scope of thought on a diverse set of issues, which include images of statehood, soft power, and ideas.  .

For those not aware, Blackberry, formally R.I.M. (Research in Motion), is a tech company largely responsible for shifting a cellphone to a popular handheld computer, increasing the ability to communicate with one another, and therefore supporting the idea of ‘staying informed’.  The Waterloo, Canada based company has for some time been in decline largely because of competition from iPhone and now Samsung. At its peak a Blackberry share was worth $149.90 in June of 2008.  In September of that year a share would fall below $50.  In a recent statement by the company that it lost $1 billion in the second quarter.  While this news became public so did the news that Fairfax Financial Holdings Ltd offered to buy Blackberry for $4.7 billion, or $9 a-share.  For Blackberry, as this information became public it symbolised a clear end of the falling tech giant, which somewhat naturally fueled media speculation on what would be next for company and if the company could find a buyer.  Moving beyond this, the concept of Blackberry in decline increases the potential of shaping of Canada’s image in the international. 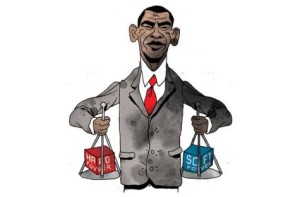 Soft power is an attempt at moving beyond the ‘traditional’ way power is gaged: size of military and economic strength. (Image Credit: Luis Vazquez, Gulf News)

Conceptually, soft power needs an introduction.  Here, it is first important to understand Joseph Nye, Harvard University Distinguished Service Professor, who writes broadly on an array of US foreign policy issues.  Nye is recognised most often for his work on soft power.  At the theoretical level soft power is a fairly weak attempt at moving beyond the ‘traditional’ way power is gaged: size of military and economic strength.  As a method of deconstructing power beyond this traditional analysis Nye points to  three methods with which power exists: “power is the ability to alter the behaviour of others to get what you want: coercion (sticks), payments (carrots), and attraction (soft power)”.  Conceptually it provides inroads to understand the complex nature of state power and thus provides a methodology that helps understand and determine how a country get want it wants through persuasion as opposed to military or economic means.  According to Nye this is done through the ability of ‘softly’ persuading others—countries—through popular products, such as Coke and Oprah.  Moreover, such an analysis means moving beyond states as the primary actors in international politics and instead broadens the ‘things’ that influence decisions and thus politics around the globe.  As Nye states, “traditionally the way that people thought about power was through military power, but we need a new narrative if we are to understand power in the 21st century.  It is not just prevailing in war…it is who’s story wins”.

It is no secret that corporations have a long history of influencing state power and alter state interest. In an interview that appeared in Foreign Policy (FP), Muhtar Kent, Chairman and CEO of Coca-Cola Co, was asked to provide his perspective on a variety of issues that included climate change, power in the post-crisis era and computer hacking.  This piece frames itself on the 2008 “financial crisis altered the very nature of the international balance of power”.  The piece reads as if the shifting of the balance of power in international politics somehow left the door opened for an increase in corporate influence on politics.  Ian Bremmer, the FP writer, asked Kent: “what are some of the ways that a company like [Coke] can bring positive change where governments increasingly don’t have the power to do so?”  Kent’s response is telling: “[utilise] what we call the golden triangle, a collaborative effort between government, business, and civil society as they come together to tackle big issues—societal issues, economic issues, investment issues, governance issues—that fall all of us”.  According to Kent, clearly Coke has a role in not only continuing to shape global politics, but also acting as an omnipresent force that shapes the US brand, whether the US requires it or not.  Here it easy to conclude that Coke acts as a representative of the State Department, inherently the actors get paid by Coke cause American values and goals to persist throughout the world.

As the state evolves, so does its ability to reach people.  More than ever branding has become integral aspect of the state and how it manages itself on the international stage.  Of course, much of this is out of the hands of states people and rests in the hands of global brands such as Coke.  As Kent highlights, [i]n every market that we’re operating in, no matter what region in the world, we are seen as a local brand.  We are always selected as the No. 1 brank in South Africa, not as an American brand but as a South African brand.  In Turkey or Russia it’s the same.  A successful global company needs to mean different things to different people.  When you have Coca-Cola empowering women in Ghana or helping farmers in Haiti or building schools with youth leagues in China, that’s what makes the character of the company closer to what people want it to be”.  While Kent seemingly undermines the power of Americana connected with Coke the US remains deeply indebted to what Coke does overseas.

While the Blackberry brand is dwarfed by the brand power of Coke It is nevertheless logical to conclude that just as Coke, Blackberry would inherently be connected with the Canadian identity.  Blackberry’s future remains bleak.  As a result of the Blackberry decline the Canada image will suffer.  The impact on the Canadian consciousness abroad overall is not important and nearly impossible to conclude with any certainty.  The important aspect to keep in mind here is the connectedness of corporations, the state, and constructing a state reality for international consumption.

Related articles in the categories Economy and Trade, North America