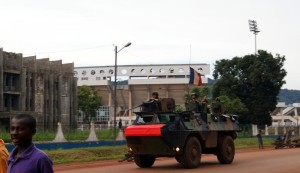 French soldiers, shown on patrol in Bangui, are to receive reinforcements under a new agreement between France and the Central African Republic

A year ago, when then President François Bozizé appealed to the US and “French cousins” to help repel Seleka’s advances on Bangui, but both countries refused. Angry crowds attacked the French embassy and criticized France’s passivity, especially since the former colonial power has a military presence in the former colony since 2003. When French President François Hollande visited Central African Republic (CAR) in late December he made it clear that he would not mingle in internal affairs, insisting that these days were over. Hollande knows the dangers of renewing its ties with its colonial past.

After ousting Bozizé, Seleka leader Michel Djotodia proclaimed himself President. In September, he dissolved Seleka and only integrated some of them into the army, leaving the others unattended to. Since then the country has plunged into chaos as undisciplined rebels commit widespread looting and abuses against those they consider as Bosizé supporters. The deep climate of insecurity has led to the creation of anti-balaka forces (self-defense groups) who have taken up arms against ex-Seleka fighters. The most worrying aspect of the crisis is the rise of sectarian violence between religious communities. Indeed, the majority of the Central Africans is Christian while Séleka fighters are predominantly Muslim, many of them from Chad and Sudan.

So who is going to act now?

In view of the gravity of the situation, France has decided to send an additional 800 soldiers to help the 3,600-strong African Union force restore order. France’s decision led an Algerian journalist to state that it signifies a return of “Françafrique” since this new operation comes only ten months after the French intervention in Mali. The debate over France’s reason for intervening is always raised.

Why is France intervening after standing by in March 2013? The main reason cited by Paris is a humanitarian one. The situation is deteriorating badly and grave human rights violations are being committed, including rape and massacres. The self-defense groups are just as bad as Séléka and 460,000 people have already fled. Djotodia is unable to restore order and appears completely lost. For Hollande intervening has now become a question of responsibility. Whether there are real risks of genocide or not, Rwanda still haunts the French political class. 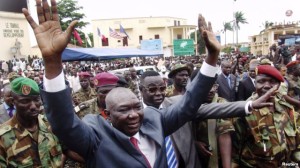 Will the belated intervention bring stability to CAR?

1,200 French soldiers are unlikely to restore long-term stability, especially in a country bigger than France. However they will at least support the ill-equipped MISCA in an attempt to restore order. The French also hope that the UN will send additional peacekeepers as quickly as possible. UN Secretary General Ban Ki-Moon recommended 6,000 to 9,000 men.

But what CAR needs is a political solution and France made it clear that it is the role of Central Africans to settle these problems. Since its independence, CAR has never established a strong political structure or arena. Djotodia is clearly unable to deal with the situation. Just a couple of days ago, he denied assertions that the country is at risk of genocide and accused the international community of manipulating public opinion. “For me, there is nothing to show that we can even talk of what is going on as genocide. This is simply vengeance. A regime committed abuses, it is now gone. Its victims are taking revenge, that is all.” “That is all”? Graver still he criticized displaced Christians in the north: “He who wants to drown his dog, accuses it of having rabies, that’s all. Our situation is no less dramatic than that in other countries but it is portrayed as such. It is unfair.” The self-proclaimed President is either blind to the populations’ suffering or he is unwilling to prevent violence.

As the International Crisis Group states, it’s “better late than never.” The current situation could have been prevented if regional and international organizations had acted early instead of being bystanders. Nobody moved a finger when Seleka staged a coup but the consequences should have been anticipated. The political situation will clearly not be settled through a military intervention but at least some seem to move beyond the bystander role.

This article was originally published on www.willwriteforprevention.wordpress.com