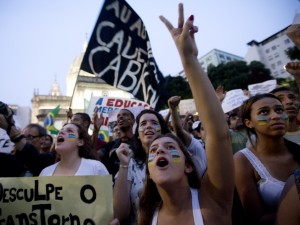 Over the past four weeks Brazilians and Turks have been holding mass protests against their respective governments, albeit for very different reasons. Despite the catalyst for these protests being very local issues, they have gotten senior government officials from around the European Union concerned.

I was in the cities of Salvador and Fortaleza – both major cities in the north east – when the protests broke out all the way in Brazil’s economic hub of São Paulo in the south. Watching the initial protests unfold over what seemed a trivial rise of 20 centavos (6 British pence or 9 US cents) in bus fares, I had to scratch my head and wonder why this provoked such mass outrage. But the proceeding protests that mushroomed all over Brazil, from Belo Horizonte to Brasilia, and Porto Alegre to Paraiba state, confirmed that the Brazilian people are just fed up of the poor quality public services they are paying for at increasing rates and high political corruption at the state and municipal level.

Turkey’s protests, by contrast, were easier to understand from the outset. A deal between the government and a real estate developer had been struck to build a shopping mall on the historical site of Taksim Square in Istanbul. It is worth noting that the square and its monument honours the establishment of the nation in 1923, so mass civil unrest could have been easily anticipated by any civil servant worth their salt. Like the Brazilian protests, however, the on going protests in Turkey are about much more than this. They are about the low public approval of the prime minister of ten years, Recep Erdogan, who has enforced conservative religious values on a people who generally value a secularist state.

So, how has this gotten the backs up of Europe’s leaders? They’re scared the same might happen to them. This week members of the European Council (the assembly of EU leaders that decide Europe’s priorities) agreed to tackle youth unemployment, which affects one-in-four Europeans from the ages of 18-25. As Italian Prime Minister Enrico Letta points out in an op-ed in The Financial Times, “[youth unemployment] raises questions…about the sustainability of our democratic systems.” The demographic of protesters in Brazil for example shows over half were under 25, and the same is true in Turkey where in a recent protest over 290 people under the age of 18 were arrested.

It is about time that national leaders start appeasing their citizens who are suffering amid an economic crisis, and deep governmental budget cuts. But, there is still much to do to appease Europeans who are especially reliant on a broad social security system.

To echo the lines of Peter Finch in Network, the Brazilian and Turkish people have said to their governments, “I’m as mad as hell, and I’m not going to take it anymore!” It’s quite possible we’ll be hearing the same from Europeans too.