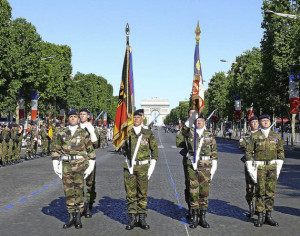 July, 14th, 2013: 4800 soldiers march along the Champs-Élysées in Paris to celebrate the French National Day. Among them were 200 German soldiers – members of the Franco-German Brigade, accompanied by four German aircraft taking part in the flyover. Back in 1994, German soldiers and tanks, headed then by a German General, marched already along the same route as members of the Eurocorps.

“This was an historic event with Germans parading for the first time in France since 50 years, a real symbol of peace and French-German successful friendship relations”. (Eurocorps)

One of the units that form the Franco-German Corps is the 110e Régiment d’Infanterie, based in Donaueschingen, south Germany, since the early 1960’s. The unit was incorporated into the Franco-German Brigade in 1989 and its German counterpart – Jägerbataillon 291 (291st Light Infantry Battalion) – is based in Illkirch-Graffenstaden near Strasbourg, France. These two units are not the only units that form the French-German Brigade, but they are the only non-bilateral units based in the territory of the partner nation.

The French government, however, has recently announced the closure of its regiment in Donaueschingen. In times of austerity, this does not come as a surprise. After all, European NATO states have cut their military spending significantly and reduced their forces by 160,000 soldiers between 2009 and 2011. However, the decision is likely to be based on more than merely cost cutting. The decision is widely believed to be an expression of French discontent with German foreign policy. 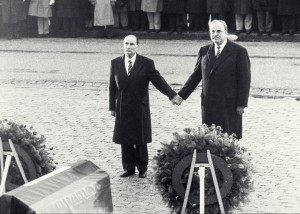 French President Mitterrand and German Federal Chancellor Kohl participated in a memorial service for fallen soldiers at Verdun in 1984 . As the national anthems of both countries played, Mitterand and Kohl joined hands – a gesture of friendship symbolizing the lessons learned from a frightful past.

The German Ministry of Defence stated its disappointment. However, Germany should not be too surprised about the French withdrawal. Indeed, Germany should consider this step as a stark warning. The closure of the 110e Régiment d’Infanterie does not mean the end of the strong relationship between both countries, in fact about 500 French soldiers will remain in Germany as part of the Franco-German Brigade. However, the withdrawal of the unit sheds light on a relationship that can be described as rather bumpy in recent times.

A report by Deutsche Welle emphasised that the Brigade is described as “military drill world champions”, but it never had the chance to apply what it is good at: bilateral cooperation. Soldiers of both nations are in Afghanistan, the French in the East, the Germans in the North of the country. Bilateral experience gained in over 25 years of training might have proven useful in a joint mission in Afghanistan. However, soldiers of both nations are in Afghanistan under a national, not a Franco-German, command structure.

The UN decision for the NATO led intervention in Libya was another prime example of a missed opportunity. Germany – a non-permanent member of the UNSC at that time – abstained from the vote and was subsequently on the same side as China and Russia, rather than France, the UK and US. According to a poll, 60% of Germans supported an intervention by NATO, but at the same time 60% objected to the participation of German forces. This is not how cooperation on the international stage works. This is not burden sharing – this is free riding.

When the international community debated the possible consequences of humanitarian intervention in Syria, it became clear once more that French and German foreign policy is not synonym. This is not to say that France’s pro-intervention and Germany’s contra-intervention approach was right or wrong. The dangers of (non)-intervention were all too evident. What matters is that they did not speak with one voice. 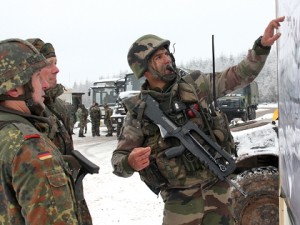 Mali is a further case in point. A mission by the French, widely considered as legitimate in Germany to prevent Mali from becoming a host for terrorism, was only half-heartedly supported by the German Government. A tanker aircraft and transport planes were dispatched, followed by 180 soldiers taking part in the EU training mission. Too little too late. France hoped for a speedier and stronger response.

Inevitable the French government questions the value of Franco-German friendship.

It’s not news that Germany is still reluctant to use military force due to its history. On the international level, however, this reluctance is often criticised by its foreign partners. A nation that is Europe’s largest and the world’s fourth largest economy cannot simply stand by and expect the US, France and the UK and others to risk their soldiers’ lives. In addition, German military spending ranks in the global top ten and its economy depends heavily on export. A nation of Germany’s weight cannot stand for human rights and free trade routes if is not willing to stand up against regimes that do not respect such rights. Although the carrot is always preferable, the example of Syria has shown that at least the threat with the stick might sometimes prove useful. Germany’s free rider approach might be welcomed by large proportions of its citizens, but it severely damages Germany’s image as a reliable partner on the international stage.

The closure of the French base is the logical consequence of Germany’s reluctance to live up to its responsibility. The Franco-German Brigade is of significant symbolic value. It is worth preserving this symbol of Franco-German friendship. Although friendship can include disagreements, both sides need to march in the same direction. That includes foreign and defence policy. The closure of the French regiment in Germany is a stark reminder that Germany can no longer evade its responsibility on the international stage.