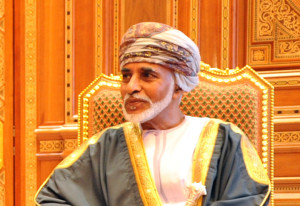 In 1970 Sultan Qaboos took control of the state in a coup that saw his father overthrown and Oman set on a course towards modernisation. (Image by Wikimedia)

The Middle East has undergone great upheaval in recent years; a transformation that has changed the political makeup of the region. For many authoritarian regimes the Arab Spring brought their governments crashing down around them, but for others the effects were less destructive. These regimes managed to ride out the storm, relatively unchanged. Oman was one of these nations.

In the grand discourse on Middle Eastern politics the focus rarely stays on the Sultanate of Oman. Observers pass it by, instead looking at the inner turmoil of Yemen, the control of Saudi Arabia or the glittering towers of the U.A.E. However, focus should be on this country at the end of the Arabian Peninsula. Here, hemmed in by the Empty Quarter and the Indian Ocean, is one of the least democratic states in the world. Oman has had a long history of royal rule, however unlike most global monarchies, it has resisted the intrusions of democracy.

The Sultan’s word is law in Oman. In 1970 Sultan Qaboos took control of the state in a coup that saw his father overthrown and Oman set on a course towards modernisation. Qaboos’ 1970 vision was a state in which oil revenues drove development and ended Oman’s political isolation, a characteristic that had been a hallmark for decades. Qaboos has achieved economic modernisation. The power of oil has been harnessed effectively and it has been funnelling money into tourism, heavy industry and critically improving the living standards of its citizens. The Sultan’s success with the economy is undisputed but the success masks Oman’s political realities.

Sultan Qaboos established his state as an absolute monarchy, but unlike its neighbours; the absolute monarchies of Qatar and Saudi Arabia , there is no modification or influence from family members. Qaboos rules alone. For critics of the Omani state Qaboos is an autocrat, a ruler who has justified his rule through the tradition of monarchy but rules just as dictators have done across the world.

The critics are justified in their assessment of Sultan Qaboos. For the past forty years he has ruled like the monarchs of Europe in the Middle Ages. He not only rules the country, but dictates foreign policy, occupies high positions in the military and has final say in all things judicial. His tours around Oman are reminiscent of the grand tours undertaken by Henry VIII and for any outsiders this is a modern state with a distinctly medieval feel. 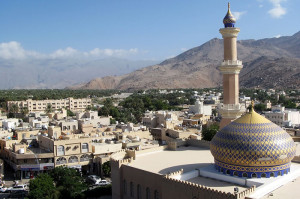 There is an almost romanticised view of Oman. For tourists, the monarchy is part of the charm, a nod to the world of Aladdin and One Thousand and One Nights.

But unlike dictatorial regimes around the world the monarchy of Sultan Qaboos receives little condemnation from world leaders and generates little controversy. Countries like Great Britain and the USA have invested heavily, both economically and politically, in the continued success and stability of Qaboos’ regime. In 2009 the USA signed a free-trade agreement that opened up Oman to the world. Within one document the American’s had established a firm bond with the state. Likewise the British have continued the influence they established during the height of British imperialism and in modern Oman it is the military who have been the biggest beneficiaries of British advice and funding. Both states have, yet again, asserted their policy of prioritising co-operation with states in the Middle East whose policy aims match up with their own, but like the economic successes of Oman foreign support masks the political realities.

There are cracks in the Omani state that have raised questions for this ‘ancient monarchy’. Throughout the Middle East the Arab Spring had an impact on governments and, even in rigidly controlled Oman, there was a groundswell of political protest that forced the Sultan to grant economic concessions. The protests, however, raised a bigger question for Oman; what’s next? Qaboos has not named a successor and this may yet see Oman put on a different course.

However, for the moment, a stripped back Oman is a nation where democracy is an underused concept. In the deserts of the Arabian peninsula Sultan Qaboos has set himself up as an absolute monarch; an heir to the ancient Sultan’s of Arabic folklore. He has used the heritage of this ancient monarchy to avoid being associated with connotations of autocracy, dictatorial practices or authoritarian rule. This practice has worked well for the Sultan. Unlike other authoritarian leaders in the Middle East he has not seen widespread criticism or social uprising to the scale that overthrew Presidents Mubarak and Morsi in Egypt or Gaddafi in Libya. Instead there is an almost romanticised view of Oman; a state where ancient Arabic traditions are preserved. For the tourists that travel to Oman the monarchy is part of the charm; a nod to the world of Aladdin and One Thousand and One Nights. The same can be said about the governments who flock here. From Austria to the UK Qaboos has been awarded with the highest honours by foreign states across the world. His position as a monarch, rather than a dictator, has legitimised his rule in the eyes of foreign states. This mentality is dangerous. It blinds the world to the democratic failures of some states.

We must see Oman for what it is; an autocratic regime in which the traditions of its ancient monarchy are allowed to dominate the principles of democracy. I do not seek to condemn the concept of monarchy, but I do believe that when we leave monarchy unchecked the result is an authoritarian regime. Oman may be a mystical desert kingdom in the eyes of many, but the political realities of this state exposes a nation with many flaws.