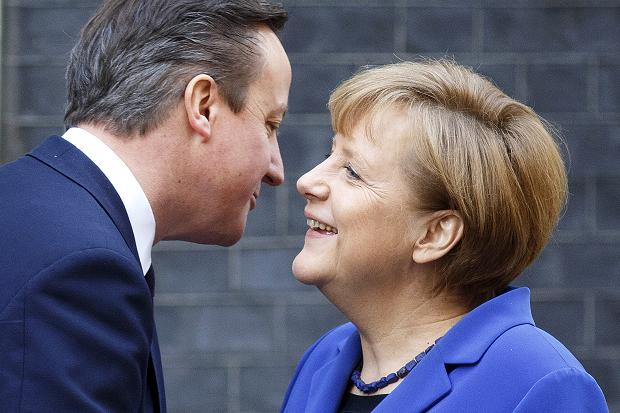 Merkel faces an up-hill struggle to convince her London colleagues that they can significantly benefit from Europe whilst carefully managing their expectations. (Image: The Times)

Dwarfed by the shadow of events in Eastern Europe, you’d be forgiven for having missed German Chancellor Angela Merkel’s visit to the United Kingdom last month. Welcomed in relative luxury compared to the media hounding suffered by France’s Francois Hollande, she was invited to meet the Queen and be the first Chancellor to address the Houses of Parliament since 1986.

On the eve of the centenary of the start of the First World War, Merkel’s visit stands as a comforting reflection on how far Anglo-German relations have come in the last hundred years. The undisputed economic juggernaut of Europe, Germany has demonstrated once again its prodigious ability to bounce back as a global super power, now at the helm of the European project.

When it came, Merkel’s speech was an unapologetic defence of the European Union, a brave if predictable strategy considering the makeup of her audience. Already the 2015 general election promises to muscle Britain’s relationship with Europe to the fore, and whilst UKIP’s Nigel Farage bangs the immigration drum, David Cameron will likely tantalise the Tory right with the prospect of a referendum. But credit to Merkel, she flattered her suit-clad onlookers with the concession ‘we need a strong United Kingdom with a strong voice inside the European Union.’

Throughout the address, it was emphasised that member states must adapt to meet new challenges, and ‘renew the political shape of Europe’ for the better. The Chancellor was explicit in her belief that Germany and the United Kingdom can together make Europe a stronger entity. The partnership, it was proffered, can improve financial regulation, economic ties with the United States, the role of the European Commission, and even negotiations over the next EU budget. Merkel cannot be accused of lacking optimism.

But simmering beneath the surface of Merkel’s visit were power plays of old. The fact she was honoured so prestigiously by her British counterpart was a clear statement of intent to align with the growing influence of a Germany freshly emerged from the downturn. Britain would be foolish to distance itself from such a prosperous economy, and undoubtedly finds Berlin more politically reliable than Paris. But perhaps more importantly, Cameron knows that if he is to negotiate any kind of deal on Britain’s standing in the EU, it will require unequivocal German approval. When Merkel speaks, the world listens, and this has been abundantly clear throughout Europe’s recent dialogue with Vladimir Putin (even if she is accused of needing to do more than ‘work the telephones’).

From Germany’s perspective, interest in Britain is growing. Whilst it might be assumed that Berlin would gladly see the back of its Eurosceptic colleague, it is in fact duly noted that Whitehall consistently contributes more to Brussels’ coffers than it withdraws. The Economist also attributes this attitude to a ‘deeper affinity, wrought by aspects of common culture and mutual regard for America.’ A January 2014 paper from the Deutsche Gesellschaft für Auswärtige Politik e.V. argues that Germany is at a crossroads between ‘a more integrated eurozone and a wider Union in which all member states can find their place’. In this regard, London is ‘a powerful ally in shaping Europe’s opportunities in a globalizing world’, and it is not taken for granted how much of a contribution to defence and security she makes. On the other hand, if Britain is given a green light to cherry-pick its membership package, the whole structure of the EU is undermined. Merkel faces an up-hill struggle to convince her London colleagues that they can significantly benefit from Europe whilst carefully managing their expectations.

However, if closer alignment in Brussels is to be the way forward then the removal of other barriers to Anglo-German cooperation is already underway. Merkel’s visit came just after a public shift in attitudes toward the objectives of German foreign policy, and an apparent changing mind-set toward intervention. Long considered Europe’s ‘unwilling hegemon’, Germany has been shackled by decades of national guilt and a restrictive constitutional framework. It was not until the 1999 Kosovo crisis that German troops intervened in an offensive role for the first time since 1945. Even in 2014 the actions of the Bundeswehr are under the microscope.

With the formation of a new government this year has come a new foreign policy ethos: ‘an economic powerhouse like Germany can’t continue to stand on the sidelines.’ It is recognised by the recently-appointed Foreign Minister Frank-Walter Steinmeier and Defence Minister Ursula von der Leyen that a passive attitude to intervention and security is simply not befitting a country of Germany’s size and wealth, even if Merkel’s faith in military missions has been rocked by involvement in Afghanistan.

How does this translate into workable policy? The New York Times rightly nips in the bud any notion that Germany is about to recklessly deploy troops to Mali or Syria. Instead we are likely to see ‘a more robust Germany willing to commit resources in support of joint operations or play a bigger role diplomatically’. Such action is much more in the spirit of EU defence policy and is essential now that Europe’s shrinking defence budgets demand specialisation. As far as Britain is concerned, this potentially opens the door to agreements in the same mould as the Lancaster House Treaties, signed with France in 2010. Already, the development of a joint drone programme is underway and Anglo-French military exercises have been hailed as a success by both sides. The future of European defence integration looks altogether brighter.

Of course, it will take time for Berlin to adapt to this new, assertive outlook, but importantly the ideological framework is there. The necessary people are in power. In his address to the Munich Security Conference this year, President Joachim Gauck stated ‘it’s precisely because these are good times for Germany that we have to consider what we have to change today to protect what is important to us.’ These are comforting words for London as Putin pushes Western resolve in the Ukraine. David Cameron has only to gain from this revitalised Germany.

Looking ahead to August, the British commemoration of the First World War has been allocated £50m; in contrast German tributes will be a low-key affair, symptomatic of a nation carrying the weight of two colossal defeats. But attitudes are changing. If 1914 was a year marked by German aggression, then 2014 promises to be one of great German prosperity.