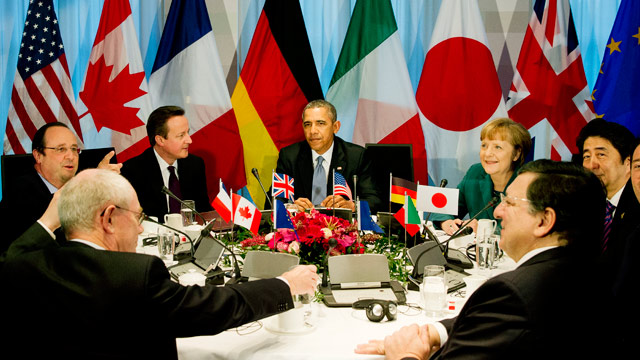 The G7 in The Hague, discussing “deeper sanctions” against Russia if there are “further incursions into Ukraine”.

The resemblance to 1914 and 1938 are evident. Russia, like Germany in 1914, feels encircled by potential adversaries. Moreover, Moscow is determined to protect ethnic Russians and Russian speakers outside of the Russian Federation. Similar arguments were made by the Nazis when they occupied parts of Czechoslovakia in 1938 – a move that was met by appeasement from other European powers.

Calls for sanctions have been opposed due to concerns about Europe’s economic recovery and whilst the EU is running the risk of spiralling tit-for-tat sanctions, it is also verging on the pursuit of a strategy of appeasement that Putin will be all too eager to take advantage of.

The EU sanctioned 21 individuals with travel bans and the freezing of accounts and the US, Canada and Japan imposed similar sanctions. Unfortunately, the sanctions adopted so far are rather weak and are unlikely to change minds in the Kremlin. Considering that Russia has just marched into a sovereign state, seized parts of its territory under the false pretext of the Responsibility to Protect and redrawn its borders within a few weeks, the response seems to be nothing more than a drop in the bucket. The sanctions will not convince Russia to return Crimea to Ukraine, nor will they preclude any further expansionist plans by Putin.

Whilst countries such as Poland and the Baltic States call for hard-hitting sanctions, France, Germany and the UK are worried about their economic ties with Russia. In addition, south European member states are concerned about their already weak economies. Subsequently, EU governments are reluctant to put any economic growth at risk. Following the pros and cons of the debate, one might wonder whether economic prosperity is more important than security and freedom. People in Eastern Europe might answer this question differently to bankers and financiers in the UK’s capital, ship builders in France or representatives of Germany’s energy dependent export industry.

The EU has survived its first domestic crisis – the Euro crisis – but Brussels is still in its infant years when it comes to foreign policy. Putin is aware of that and successfully taught Europe a lesson: soft power is all well and good, but what really matters at the end of the day is hard power, that is boots on the ground. Moscow has presented the EU with a fait accompli and Brussels seems to have no choice but to accept it as Europe would not want to risk a military conflict with Russia. After all, (Western) Europe and the US worked hard to avoid a war with the Soviet Union during the second half of the last century.

On the other side of the Atlantic, the Republicans decry Obama’s foreign policy and his approach to Russia as naïve and lacking decisive action. Increasingly, we witness what the world might look like if Washington reduces its international involvement. Although US foreign policy has it flaws, its critics need to be aware which countries might fill the vacuum left by an American withdrawal from the international stage. Russia might be one of them. Thus, Senator John McCain calls for more decisive action, including a military build-up of NATO forces in Eastern Europe. But after Afghanistan and Iraq, the US is tired of fighting and investing money into conflicts whilst many Americans feel the consequences of the debt crisis. Most importantly, the risk of a military conflict is high and this is not Iraq or Afghanistan. This is Russia.

It is obvious that the West in general and the EU in particular is placed between a rock and a hard place. If Europeans believe in values, such as freedom and democracy, the EU cannot stand by and watch Russia annexing territory on its very doorstep in Eastern Europe. However, Russia is the source of most of Europe’s gas and oil imports – the source of economic wellbeing and prosperity. In a nutshell: this is about values versus money and Europe has to make a choice.

The Need for Sanctions

If Europe is serious about values such as freedom and democracy, standing by is not an option. For Putin to take the EU seriously as a geostrategic actor, it requires a strong and unified response. The obvious responses are sanctions. However, economic sanctions are often described as being of limited success. The elite are hardly affected as the brunt is felt by the people on the street and Russians are unlikely to remove Putin from power as the Kremlin will make sure that his party is successful in the next elections. Notwithstanding, in the past sanctions have, for example, forced Iran’s regime to the negotiation table. The only alternative is appeasement, but the shadows of 1938 are still present and Eastern European countries that are home to Russian speaking minorities want to be assured that history will not be repeated.

Putin is unlikely to change his course of action without resistance and although there is no guarantee for success, sanctions are the only viable option. Europe imports 79 per cent of Russia’s oil and 81 per cent of its natural gas (100 per cent if NATO member Turkey is included). No doubt, Moscow is well aware that Europe does not want to jeopardize its recovering economy and the threat of limiting oil and gas exports will be sufficient to send a shockwave through Europe’s stock markets. This is Putin’s trump card.

Russia has switched off gas supplies to Eastern Europe before. However, it will think twice before switching off supplies to the EU. Beyond oil and gas, Russia’s economy lacks diversity and strength. Revenues from oil and gas exports accounted for more than half of Russia’s budget in 2012 and it cannot simply be diverted to other potential customers such as China due to a lack of transport infrastructure. Reduced gas and oil exports will hit Moscow’s finance coffers hard as there is no possibility to compensate for these losses. Therefore, Russia is unlikely to stop its exports to Europe.

The EU is the recipient of 45 percent of Russia’s overall exports. In return, less than 7 percent of EU exports go to Russia. If oil and gas exports are excluded from the sanctions regime, the EU has alternative possibilities to send a message to Moscow. The export of machinery and transport equipment accounts for nearly half of all exports from the EU to Russia. In addition, three quarters of foreign direct investment in Russia is provided by the EU. This is where the EU can apply significant pressure. Most importantly, the EU can support members that are most likely to be affected by the sanctions whilst Russia has no one to turn to. It is clear, then, which of the two parties would be hit hardest by a reciprocal exchange of sanctions.

In addition to these short term measures, the EU needs to cooperate in earnest with more reliable energy suppliers. Renewable energies and fracking for shale gas would reduce Europe’s dependency on less stable regions even further. The shale gas industry might be in the early stages of its development, but any attempts by Russia to pressurise its customers will not only result in the EU, but also other regions, investing more resources into energy diversification and seeking other, more reliable, suppliers.

The Kremlin needs to ask itself why Eastern Europeans turned their back on Russia and cooperated with the West rather than aligning themselves with Moscow after the fall of the Iron Curtain. The suppression of human rights in general and the specific lack of freedom and democracy in Russia’s zone of influence during the Cold War were likely to be factors. Unfortunately, Russia still seems to be unable to cooperate with its neighbours and responds with coercion instead. If Europe wants to send a strong message it needs to accept economic pain. That won’t be easy to digest for the EU’s economy, but the only alternative is to stand by whilst Russia suppresses its neighbours. The pain caused by sanctions is likely to be lower than the pain Europe might experience should Putin not be stopped.

The EU has its origins in economic cooperation, but first and foremost it is a union of states that share equal values. These values should be placed above economic gains. If the EU is reluctant to stop aggression that is not only illegal, but also illegitimate, Putin is incentivised and likely to continue. The EU needs to choose: it is either a strong actor on the international stage and stands for freedom and democracy or it is a compliant and short-sighted mess which is, and will continue to be, subject to bullying and manipulation from Moscow.

This article was originally posted as part of the policy brief “Ukraine: A Regional Crisis with Global Impact“, published by the Humanitarian Intervention Centre. The HIC is an independent foreign policy think tank seeking to draw attention to the consequences of action and inaction in the face of serious human rights abuses and violence against civilians the world over.