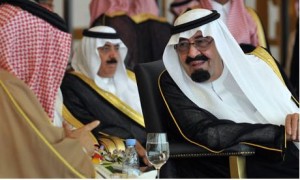 The Kings of Saudi Arabia and Bahrain. These monarchs are able to use the vast energy resources of their countries to maintain authority.

Three weeks ago I argued that democracy often inhibits the economic growth of developing states. This is because democracy generally results in the diffusion of economic decision making throughout the population, which exposes domestic businesses to larger, more efficient, foreign competitors. Thus, I contended that centrally coordinated control over economic policy allows for greater long term growth, and the political conditions most favourable for this are authoritarian ones.

For example, all of the so called ‘Asian Tigers’ achieved economic growth through the implementation of protectionist economic policies, which were coordinated via a centralised authority. Moreover, almost all of these countries democratised only after their  economies had become developed.

Nonetheless, they did democratise, which brings us to another question: Is economic growth good for democracy. And the answer is, initially, no

As stated in the first article, only three of the world’s top twenty richest countries are not democratic. Of these three, both Saudi Arabia and Russia derive their wealth from the primary economic sector, resource extraction, in the form of non-renewable energy reserves. The former, in particular, generates massive revenue from its abundant crude oil reserves, which constitute 95% of exports. Coupled with a relatively small population, of which around a third are foreign expatriates, the kingdom is blessed with a very high per capita GDP.

In the case of Russia, many people associate democracy with the chaos that ensued within Russia as a result of the failed economic transition of the early 1990’s. As Russia embarked on an ambitious dual transition (economic and political) from a communist system, a policy of economic ‘shock’ therapy created vast inequalities, resulting in the impoverishment of much of the population. Coupled with the 1998 financial crisis, it is not surprising that many ordinary Russians were very supportive of Vladimir Putin when he instigated a programme of political and economic centralisation, which led to stable economic growth. Nonetheless, there are renewed calls for democracy in Russia, demonstrated by several recent protests, and it is arguable that domestic conditions are favourable for political reform, though such speculation is moot at present.

The third country, China, has not yet matured economically, having undergone an economic transition gradually since 1978. The result of this transition to a market economy has resulted in the largest industrial revolution in history, controlled centrally through the government’s policy of pursuing five year plans. Consequently, the Chinese government has managed to maintain annual economic growth at around 10%, maintaining its legitimacy by improving the lives of almost all of its citizens.

Thus, the three exceptions to the rule, which poses the question; why are these authoritarian regimes the exceptions, and not the rule?

Ultimately, central planning undermines capitalism because it distorts the ‘real’ market, the invisible hand, coined by Adam Smith to explain the way in which the market regulates itself through an equilibrium of supply and demand. A contemporary example of this is the manner in which the Chinese authorities are fixing exchange rates to ensure that their domestic currency, the Yuan, is being maintained at an artificially low value. The perceived benefit of this is a reduction in the cost of Chinese exports to foreign consumers. Ultimately, this practice is unsustainable because it encourages inflation, which is only being managed at the present time by the export boom, which will inevitably end. The prominent economist, Friedrich von Hayek, argued that the economy, in its vast entirety, is too complex to be fully understood. Consequently, central planning results in a mismanagement that ultimately culminates in disaster; and as soon as it becomes clear that the government does not have all the answers, people want to take decisions into their own hands.

Thus, on a fundamentally political level, the source of dissent becomes less significant than the way in which it is channelled. Within democracies, grievances can be dealt with through a change of government effected by popular consent in the form of elections, as well as direct measures such as petitions. Authoritarian regimes find discontent a lot harder to manage, primarily because they do not have this option. Furthermore, if authoritarian regimes do attempt to utilise these measures, the public often correctly recognises them as contrived. As tensions build, the only means for authoritarian regimes to contain dissent are repressive; and as the Arab Spring has recently illustrated, these lead to political polarisation, and, more often than not, failure.

Armed rebels during the Libyan revolution.

However, the consequences of democratic transition are often ruinous for national economies, as the price of democracy is usually paid in blood; armed rebellion, and in extreme cases, civil war. So, in the short term, democracy is bad for economic growth. However, the long term impact of democratic governance is the best thing possible for the economy.

The third, and final, article in this series will explain why.

This series was also published in International Policy Digest